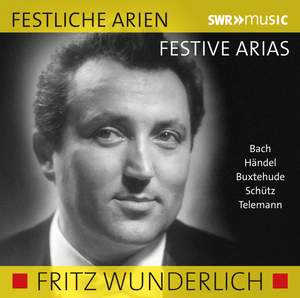 Fritz Wunderlich’s early recording of Bach’s Christmas Oratorio, from a performance in the Stuttgart Markuskirche on 18 December 1955, presents the singer of the century at the beginning of his career. One rarely hears Bach sung with such a sensual voice, and rarely is one so enraptured by a voice like that of Fritz Wunderlich.

This is also the case with the recording of Handel’s Messiah, conducted by Heinz Mende, from a concert in the Stuttgart Liederhalle on 20 March 1959. By this time, Wunderlich already had a string of successes behind him and was well on his way to achieving worldwide fame.

The other performances in this collection took place between those two recordings: they are studio recordings, all of them rarities from Wunderlich’s repertoire, which exist only in this early series of Stuttgart radio productions.

This recording is the first instalment of a 10-CD Wunderlich series, each with a different focus: