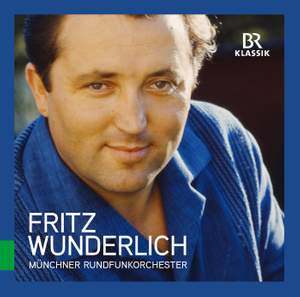 Wunderlich delivers these operetta and light opera arias, not long recorded before his tragic death, with the same ardour and elegance that made him his generation’s leading Mozart tenor. — BBC Music Magazine, March 2017, 5 out of 5 stars More…

A new CD from BR-KLASSIK commemorating the 50th anniversary of the singer’s death.

Early, as yet unreleased radio recordings made between 1959 and 1965.

Although fifty years have now passed since Fritz Wunderlich’s tragic death on September 17, 1966, the singer and his incomparable tenor voice have remained unforgotten. One reason was the meteoric success of his artistic career. Following his performance in a student production of Mozart's Magic Flute in Freiburg, the young singer was instantly engaged by the Stuttgart State Opera; he then went on to Frankfurt and Munich, performed at the Vienna State Opera and the Salzburg Festival, and had already received an offer from the New York Metropolitan Opera. What people remember most about him was his vital, lively personality, his almost limitless ability to cope under pressure, and of course his mellifluous voice, with its great depth, radiance, and delightful timbre. His accurate and always intelligible pronunciation of the words he sang has remained quite unparalleled. He performed operetta scenes with ease and charming levity; he bestowed the grace of genuine feeling onto lieder that had fallen into sentimental discredit; and he belted out party pieces with all the effortless verve of an Italian….

This new CD from BR-KLASSIK commemorating the 50th anniversary of the singer’s death presents early, as yet unreleased radio recordings made between 1959 and 1965. The recordings of some Munich Sunday concerts and studio recordings by the Bayerischer Rundfunk show him and his tenor voice at the height of their success. Together with the Munich Radio Orchestra and the Chor des Bayerischen Rundfunks, he can be experienced singing with such renowned conductors as Kurt Eichhorn, Siegfried Köhler, Willy Mattes, Hans Moltkau and Meinhard von Zallinger.

Here he focused primarily on the German repertoire, from comic opera to operetta all the way to popular hits which, to this day, more or less owe their very survival to his interpretations of them in concerts and recordings.

Fritz Wunderlich - the tenor voice of the 20th century par excellence – can be relived here in these unreleased recordings from BR-KLASSIK.

Wunderlich delivers these operetta and light opera arias, not long recorded before his tragic death, with the same ardour and elegance that made him his generation’s leading Mozart tenor.

The single cd issued by the Bayerischer Rundfunk label is likely to be snapped up by the tenor’s fans, comprising as it does first releases of broadcast material recorded in Munich between 1959 and 1966 and focusing on the operetta repertoire at which Wunderlich excelled.