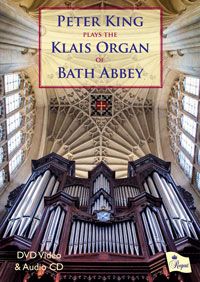 King is a fine organist at the helm of a fine instrument, and steers Mendelssohn’s E minor fugue to a superbly articulated resplendent close. At lightning speed he scuds effortlessly up and down... — BBC Music Magazine, January 2017, 4 out of 5 stars More…

Boëly: Fantasia and Fugue in B flat major, Op. 18

Peter King, Organist Emeritus of Bath Abbey, having been the Abbey’s Director of Music for thirty years (1986–2016), performs a wide-ranging concert, demonstrating the virtuosity and versatility of both player and instrument in the beautiful acoustic of Bath Abbey. Extra features include a demonstration of the organ, a brief account of the Abbey’s history, and a talk about the music performed. A CD audio-only recording of the organ concert is also included.

Peter King, is President of the Incorporated Association of Organists (2015–17). He holds the honorary degree of Doctor of Music from the University of Bath. Together with Nicolas Kynaston, he was responsible for the design and installation of the Abbey’s Klais Organ. His twelve CDs on the new instrument have been highly acclaimed by the critics.

A brief history of Bath Abbey

The Klais Organ of Bath Abbey

King is a fine organist at the helm of a fine instrument, and steers Mendelssohn’s E minor fugue to a superbly articulated resplendent close. At lightning speed he scuds effortlessly up and down across three keyboards at the end of Eben’s Moto Ostnato…and he crowns an invigorating workout with Reubke’s formidable Sonata on the 94th Psalm.