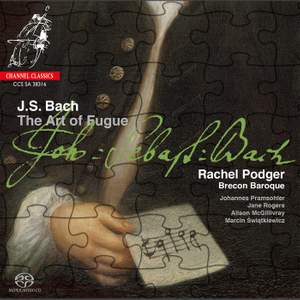 This is not an interpretation that wants to grab you by the lapels…but rather one which by its natural ebb and flow aims to draw you stealthily into the music and have you breathe with it, so... — Gramophone Magazine, October 2016 More…

Contrapunctus VI, a 4 in Stylo Francese

Canon per Augmentationem in Contrario Motu

Questions about the implied instrumentation are never going to be answered definitively. Certainly, virtually all the cycle is set out in such a way that it can be played on the keyboard, but the open score format of the original invites interpretation from any potential instrumental combination (or, indeed, even just a soundless reading by the highly trained musician). This question immediately leads on to another how are we expected to listen to this music? Are we meant to hear a sequence of virtual events or is it to be one event in a single span of time? Is it perhaps the filling out of contrapuntal and motivic possibilities that are all potentially simultaneous and which only have to be strung out in time to render them humanly perceivable? Much of this suggest that the work implies a sort of cyclic time, experienced from the point of view of eternity - in other words, the sort of time that we might imagine God experiences, superior to the messy narrative of human linear time. Yet, there are always human, worldly elements, such as the allusions to French style in Contrapunctus 6, the rhetorical pauses in the very first Contrapunctus, or the playful flow of the mirror fugues or some of the canons. This residue of human habitation is perhaps what distinguishes Bachs fugal works from the fugal (or ricercar) tradition of previous composers and in which later composers heard a voice speaking directly to them, a voice that shared at least some aspects of the modern world, even if it was entirely suffused with the sense of an overwhelming and all-embracing godly order.

This is not an interpretation that wants to grab you by the lapels…but rather one which by its natural ebb and flow aims to draw you stealthily into the music and have you breathe with it, so that you don’t notice the fugal climaxes coming until your own chest is swelling

with playing of this sophistication, the restricted sound palette works wonderfully, supporting a calm, ruminative exploration of the many fugal devices. Rachel Podger’s group manages drama too in the French-style fugue, driven by the bite of the bow on the strings. The end is achingly incomplete, as is Bach’s text.

They revel in Bach’s life-enhancing contrapuntal interplay and their relaxed, instinctive approach and ever-changing instrumentarium engender welcome contrasts within his ingenious conception. Particular highlights are the fugues scored for full ensemble, with Contrapuncti nos.7 and 9 the best of all.

the counterpoint stays clear, you can really follow the lines, and...the character of the individual players becomes an integral part of the way you hear Bach’s music. It never feels dull, academic of dry, and Podger and friends lively musical personalities bring a playfulness and curiosity to the performances that are very welcome.