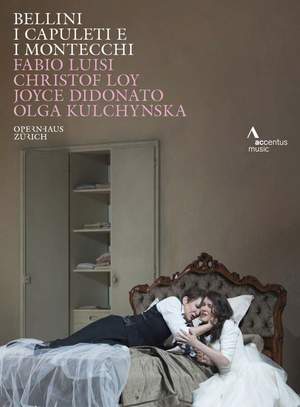 In a central work of the bel canto canon, it is crucial that vocal values are scrupulously maintained – and here they certainly are, with an even and technically excellent cast, who understand... — BBC Music Magazine, January 2017, More… 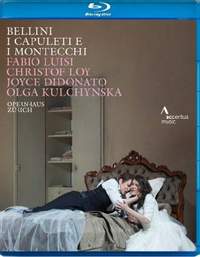 The story of Romeo and Juliet, who pay for their passion with their lives, has been interpreted in the widest variety of literary and musical genres ever since the Renaissance. Vincenzo Bellini’s much too rarely staged Romeo and Juliet opera, I Capuleti e I Montecchi, is far removed from Shakespeare’s version: rather than telling the story of a tenderly burgeoning love, the piece is an account of the last 24 hours in the two young people’s lives. The underlying mood of the piece is thus one of melancholy – which then develops into a catastrophic maelstrom. The première of the thrilling Zurich production of this bel canto gem, directed by Christof Loy and conducted by Fabio Luisi, was enthusiastically received by critics and audiences alike. The two protagonists also met with acclaim: experience world star Joyce DiDonato in the trouser role of Romeo, with the young Ukrainian soprano Olga Kulchynska at her side as Giulietta.

In a central work of the bel canto canon, it is crucial that vocal values are scrupulously maintained – and here they certainly are, with an even and technically excellent cast, who understand the need for librettist Felice Romani’s text to be given its due as so expressively set by Bellini. Fabio Luisi’s conducting, too, is dynamic and dramatically conceived

Zurich’s Opera’s cast and conductor jump on board with admirable commitment. Fabio Luisi boldly sculpts the cantabile phrases without getting bogged down, and the orchestral playing is evocative, with pungent contributions from the winds…Bernheim brings conflicted ardour to Tebaldo, and Lorenzi offers compassionate mercy as Lorenzo…yet Zurich really strikes gold with the triumphant pairing of Joyce DiDonato as Romeo and Olga Kulchynska as Giulietta…tremendously affecting

We don’t have a “pleasant surprise” award, but if we had I’d bestow it here.

The American mezzo can surely count this Bellini role among her finest achievements, and has few (if any) current rivals in it.

Joyce DiDonato is Romeo, better than in her previous assumption filmed in San Francisco in 2012