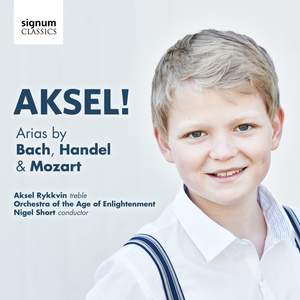 Orchestra of the Age of Enlightenment, Nigel Short

Excerpt,  Handel: Ode for the Birthday of Queen Anne, HWV74

How Beautiful are the Feet of Them

Thou Art Gone Up on High

Katherine talks to the Norwegian treble about his charming first recital disc, out on Friday on Signum.

Aksel Rykkvin is a Norwegian treble of astonishing talent, combining a rare musicality with a beautifully resonant voice. For his exuberant debut recording—featuring works by Mozart, Handel and JS Bach—he is accompanied by the Orchestra of the Age of Enlightenment under Nigel Short.

Rykkvin is certainly a treble worth preserving – a mature, musical performer whose unbroken voice offers a fascinating alternative take on much of the familiar repertoire recorded here … The music here is carefully chosen – not just textually but musically appropriate for so young a performer.

Rykkvin is truly phenomenal. Not only has nature and thorough training given him a voice that is crystal clear, perfectly pitched and heavenly beautiful, but also a technique that allows him to do whatever he wants, coloratura and impeccable runs for instance. On top of all this he is a sensitive interpreter who appears to understand the songs and arias he performs … I am running out of superlatives.

This disc is packed full of confident, musical singing...the pungent style in the Handel arias, also written for women, seems to be copied from the early-music sopranos of today, which gives the disc a rather postmodern feel.

Rykkvin certainly has a precocious musical sensibility, which coupled with his clear tones should make him a star… His technique is excellent, with particularly fluent coloratura.