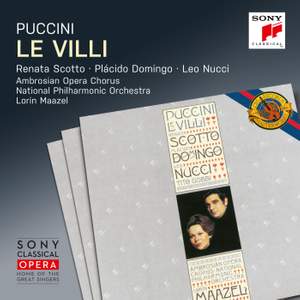 Two works by Giacomo Puccini are included in this new batch of reissues. Though still under the influence earlier composers, French as well as Italian, the 24-year-old Puccini was already being hailed as Verdi’s successor – including by Verdi himself – after he produced his first opera, LE VILLI, in 1883. Encapsulating a tragic love affair within an hour, the piece ends with the ghost of the jilted heroine and the other Willis enticing her remorseful lover into a dance of death. When the present 1979 recording conducted by Lorin Maazel and starring Renata Scotto, Plácido Domingo and Leo Nucci was released, Gramophone’s reviewer was full of enthusiasm: “Maazel is excellent in drawing out the individuality of the soloists … The ease and assurance of Scotto, Domingo and Nucci here, as well as their vocal richness, transforms each Puccinian melody. This is one of the richest and warmest performances I have heard from [Scotto] for some time, while Domingo as Roberto, rich and firm, manages to bring out the attractive anticipations of Des Grieux's music in Manon Lescaut. The recording … is spaciously atmospheric.”