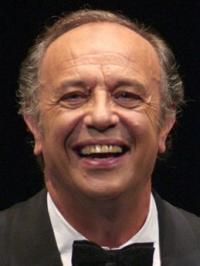 Leo Nucci is widely recognised as one of the world’s finest Verdi baritones, and is particularly acclaimed as Simon Boccanegra, Macbeth, Amonasro, Nabucco and Rigoletto (which he has sung almost 500 times). Born in Castiglione die Pepoli in 1942, Nucci’s first professional role was Rossini’s Figaro (il barbiere di Siviglia in Spoleto, and shortly afterwards he made his solo debut at La Scala, maintaining a close relationship with the house throughout his long career. His 1978 debut at Covent Garden (as Miller in Luisa Miller) brought him to international attention, and he made his first appearance at the Metropolitan Opera two years later, singing Renato in Un ballo in Maschera; he went on to sing hundreds of performances at the theatre, including Tchaikovsky’s Eugene Onein, Verdi’s Conte di Luna, Amonasro and Carlo (La forza del destino), Puccini’s Sharpless, and Mascagni’s Alfio (cavalleria Rusticana).

Find out more at https://en.wikipedia.org/wiki/Leo_Nucci