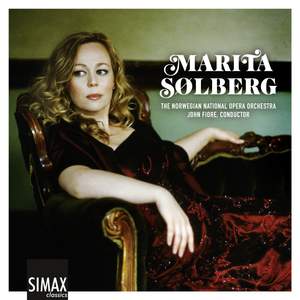 This recital disc, recorded with her home band under its music director John Fiore, should act as a neat calling card, showcasing a variety of roles in five languages…Sølberg possesses a creamy... — Gramophone Magazine, October 2016 More…

Simax Classics presents the long awaited debut solo release of Marita Sølberg. The artist behind this phenomenal expressive soprano voice seeks beauty, love and drama in her own life. She also brings this attitude uncompromisingly into her music making, enabling her to display both the beauty and lust, the darkness and frailty of the characters she portraits.

Sølberg performs music she has already had great success with on stage. Her nuance of expression, art of phrasing and vocal excess generates attention around Marita wherever she performs - such as her recent debut at the Wiener Straatsoper in the role of Mimi.

A guest with many opera houses around the world, Marita Sølberg was a member of the soloist ensemble at Stuttgart Opera until she became one of the Principal Artists of the Norwegian National Opera & Ballet in 2008. Many of her most critically acclaimed roles are gathered on this release, such as the Contessa in The Marriage of Figaro, which was hailed in an exceptional manner by the biggest national newspaper VG: "Marita Sølberg as the Contessa Almaviva is absolutely fantastic, her voice has such a wealth of nuance and fervency that she could make a stone moved. It remains an exceptional experience to hear a singer of her calibre."

This recital disc, recorded with her home band under its music director John Fiore, should act as a neat calling card, showcasing a variety of roles in five languages…Sølberg possesses a creamy lyric soprano that should be most at home in Italian repertoire…a soprano definitely worth hearing