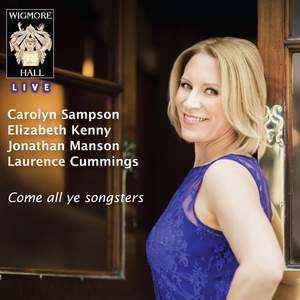 Sing While We Trip It

A Dance of Fairies

Draghi, G B: An Italian Ground

Let the Dreadful Engines of Eternal Will

Simpson, C: The Division Viol, Pt. 3: III. The Method of Ordering Division to a Ground

Carolyn Sampson has enjoyed notable success worldwide in repertoire ranging from early Baroque to the present day. She is in high demand by leading opera companies around the world, and regularly makes recital appearances too. Following the success of her first release ‘Not Just Dowland’, [WHLIVE0034] we are now delighted to present her second release on the Wigmore Hall Live label. She is joined by some of Britain’s most exciting exponents of historical performance – lutenist Elizabeth Kenny, harpsichordist Laurence Cummings, and viol player Jonathan Manson. This leading ensemble examines the colourful world of Purcell songs. Unlike his European counterparts, Purcell was unused to traditionally operatic terms and was unconstrained by them. Ignorance was certainly bliss in this case; for him ‘Song’ was a performers’ medium. Thoughout the course of this recital, recorded live at Wigmore Hall, we hear the musicians discovering and revealing the meaning of the texts, as they bring to life the works with sensitivity and charm.

of course it’s soprano Carolyn Sampson’s peerless Purcell that steals the show – whether inhabiting tortured madness, or the airborne, caressing grace of an opening set from The Fairy Queen. By way of the final encore, ‘Fairest Isle’ bids farewell with a guileless, eloquent, spellbinding simplicity.

What could be just another lovely solo recital is subtly but determinedly refocused here as an ensemble affair. Each of the musicians gets a chance to step into the spotlight, and the result is both a more interesting and a much more satisfying listen than a straight sequence of arias with the obligatory mid-programme instrumental breath-catcher … Any recording of Purcell songs enters a crowded market but Sampson makes a strong case for her contribution, with just a little help from some starry musical friends

Carolyn Sampson sings with rich yet clear soprano tone and pays keen attention to the texts she sings, as befits Purcell’s reputation as perhaps the greatest composer to set his native tongue to music…throughout it all, Sampson is royally supported by a trio of accompanists, and it’s good that they provide instrumental solos or duets too