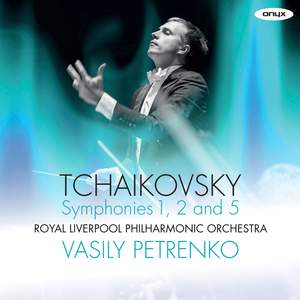 Alive and articulate, these three performances remind us that it’s just as possible to be stunned by an original interpretation of a familiar symphony (the Fifth) as it is to be refreshed by... — BBC Music Magazine, October 2016, 5 out of 5 stars More…

I. Dreams of a Winter Journey (Allegro tranquillo)

Recording of the Week,  Vasily Petrenko completes his cycle of Tchaikovsky Symphonies

James listens to the culmination of Vasily Petrenko's Tchaikovsky cycle with the Royal Liverpool Philharmonic Orchestra - symphonies Nos. 3, 4, and 6.

Recording of the Week,  Tchaikovsky Symphonies conducted by Vasily Petrenko

The eagerly awaited Tchaikovsky Symphony cycle from the Royal Liverpool Philharmonic Orchestra and Vasily Petrenko gets underway with Symphonies 1, 2 & 5. In 2015 The Tchaikovsky Album with Petrenko and the RLPO, released to coincide with the orchestra’s 175 anniversary, became one of the best-selling classical CDs in the UK and met with fulsome praise from reviewers. Volume I of the Symphonies looks set to replicate that success and indeed critical acclaim.

Alive and articulate, these three performances remind us that it’s just as possible to be stunned by an original interpretation of a familiar symphony (the Fifth) as it is to be refreshed by a bright-eyed approach to less familiar works (the First and Second).

the orchestra sounds amazing … it has a wonderful warmth and reserve and depth; it’s very fresh, I don’t think it imitates any other recordings.

It was worth the wait: this release of Symphonies Nos 1, 2 and 5 makes the best possible start to the projected cycle...If future releases match these impetuous, glorious performances, Petrenko’s should be a cycle to be reckoned with.

in some ways Petrenko's approach is a straightforward one: just do what it says in the score! He takes such care to observe every accent and dynamic marking...The Liverpool strings are fantastic...maintaining clarity and precision even when presented with a seemingly endless flurry of quavers whizzing by at a hundred miles an hour. As well as technical proficiency, Petrenko and his orchestra bring tremendous amounts of character.

Petrenko’s Tchaikovsky is authentically Russian in its bright, sharp-edged colours and rhythms...these are splendidly vivid performances.

bursting with promise...Symphony No 5, full of light, shade, intensity, yearning accentuation, is a fine addition to a busy field. Petrenko and the RLPO continue to make an exciting partnership.

Petrenko’s approach has bite and urgency, and there’s plenty of both in the more typically Tchaikovskian and more heavily emotional Fifth Symphony, where the cut and thrust of the Liverpool orchestra’s playing is impressive, too.