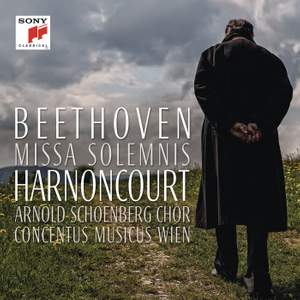 He has achieved something remarkable, a performance that is heaven-storming despite the small forces employed. The key is that every singer in the chorus and solo quartet has been encouraged... — Fanfare, July/August 2021 More…

Katherine listens to the recording of the Austrian conductor's final public performances.

When Nikolaus Harnoncourt retired from the stage in December last year, it was his express wish to release the broadcast recording of his last project, Beethoven’s monumental “Missa solemnis” as his personal legacy.

The "Missa solemnis" concerts at the Styriarte Festival Graz and the Salzburg Festival in summer 2015 were his last public performances. This recording of Beethoven's late masterpiece was made from material captured at the Graz concerts and rehearsals.

As a result of his life-long research on Beethoven, he conducted the work for the first time with the Concentus Musicus Wien on period instruments, the Concentus is joined by the Vienna based Arnold Schoenberg Choir and a handpicked solo quartet.

He has achieved something remarkable, a performance that is heaven-storming despite the small forces employed. The key is that every singer in the chorus and solo quartet has been encouraged to push expressivity to operatic lengths. Ironically, this might be the least authentic aspect of the reading; church choristers in Beethoven’s time were trained to be pure, restrained, and untheatrical.

This is a remarkable account of Beethoven’s Missa solemnis and, in one important respect, an unusual one. For though it is in no sense lacking in drama, it is in essence a deeply devotional reading...Harnoncourt’s performance has an atmosphere you might more normally expect to encounter when listening to a piece such as the Fauré Requiem.

it soon becomes apparent that to read his last account of this unsettled and unsettling work as a definitive Last Will and Testament would run counter to Harnoncourt’s restless, continually probing musical spirit...it strikes me as an uncommonly apposite farewell from a musician whose life’s work centred on questioning rather than affirming, and encouraging his performers and audiences to do the same.

It’s not perfect — the violin solo in the Benedictus sounds scrawny — but no performance of this daunting masterpiece can be. The soloists, Laura Aikin, Bernarda Fink, Johannes Chum and Ruben Drole, blend wonderfully.

unsurprisingly for Harnoncourt, there is a sense of searching throughout the performance...it’s a gentle performance overall. But Harnoncourt’s masterly control of the larger structure means that within those parameters, the moments of jubilation make all their impact.