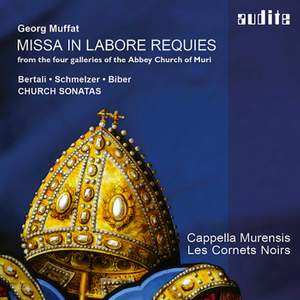 This is not the first recording [of the Missa in labore requies] but it is surely the most effective, as much as anything for its skilful use of the building; voices and instruments really do... — Gramophone Magazine, September 2016 More…

Georg Muffat’s “Missa in labore requies” alongside church sonatas of his contemporaries make up audite’s latest offering in the series of polychoral baroque music recorded by renowned Early Music performers.

With its octagonal layout and four galleries, the Abbey Church at Muri provides an ideal acoustic for performing polychoral music. The galleries surround the main body of the church, placing the audience in the midst of the musical event. This sound experience is unique, both in concert and in recordings. The considerable distance between the galleries creates challenges in the musical interaction of the different groups. At the same time, however, it forms part of the composition itself, for only through the spatial distance between the choirs is the music able to assume its intended expanse and grandeur. A suitable venue is therefore a deciding factor for the authentic performance of such works, superbly realised on this recording. The two historic Bossart organs of 1743 provide a true continuo foundation, making their mark on the impressive overall sound of the recording.

Georg Muffat’s monumental “Missa in labore requies” is the composer’s only surviving sacred work, comprising twenty-four voices allocated into five separate choirs. Muffat makes full use of the lavish scoring in this work which was doubtless written for an extremely prestigious occasion. The central splendour is repeatedly alternated with movements giving vocal soloists the opportunity to shine in virtuoso as well as expressive passages. The finest old style counterpoint stands alongside the modern concertato style, with piano passages of the great tutti echoes creating impressive effects: these are only surpassed by the muted trumpets and timpani accompanying the “passus et sepultus est” in a sombre funeral march. Church sonatas for various scorings by Muffat’s contemporaries round off this recording.

This is not the first recording [of the Missa in labore requies] but it is surely the most effective, as much as anything for its skilful use of the building; voices and instruments really do seem to come at you in waves from all directions…but regulated with such care that, rather than seeming like a dinning battle of the choirs, it is all satisfyingly of a piece. In short, this is a smoothly impressive performance of a beautifully crafted work