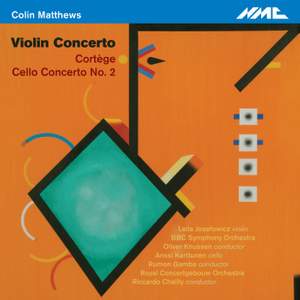 Over four decades Colin's output of over 130 works has ranged from solo piano music through five string quartets and many ensemble and orchestral works. This album showcases three of his large-scale orchestral pieces; the dark, Mahlerian Cortège (1988) being the earliest work recorded here. Matthews’ Violin Concerto (2009) was composed for Leila Josefowicz and Colin says it “emerged naturally from her musical personality, style and technique”. Matthews’ Cello Concerto No.2 (1996) was composed for Mstislav Rostropovich, who gave its first performance with the London Symphony Orchestra and Sir Colin Davis at the Barbican, London, on 17 September 1996.

Three great works, then, to celebrate the three score and ten of a remarkable musical polymath.

Lyrically rewarding and memorably orchestrated with the textures constantly shifting.

the Violin Concerto (2009) and the Cello Concerto No.2 (1996) - inhabit a world half way between Berg and Britten, where nervy, restless detail in the background gives way to a core of expressive lyricism.

Josefowicz is superb – radiant and pointed – in the concerto written for her. Cortège is colossal; and Karttunen dexterously finds his way through the Second Cello Concerto.

[Cortège's] dark, drum-beating, funereal character has, paradoxically perhaps, a more direct appeal than the Violin Concerto (2009), given by the brilliant Leila Josefowicz...The large-scale Cello Concerto No 2 (1996), written for Rostropovich, finds a fine exponent in Anssi Karttunen

Josefowicz, for whom Matthews tailored [the Concerto], soars high above the orchestra as if on a thermal...[Cortège is] sombre but driven – monumental, yes, but one somehow feels inside the monument rather than gazing on it.