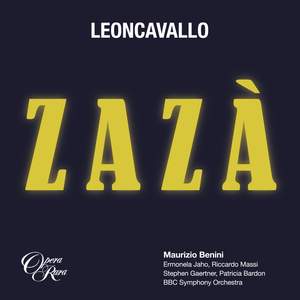 In this recording of the composer’s revised 1919 version of the accomplished score, conductor Maurizio Benini brings a light touch to his micro-management of BBC forces. Ermonela Jaho offers... — BBC Music Magazine, July 2016, 4 out of 5 stars More…

Or tempo e baci per guadagnare

Katherine talks to the Albanian soprano about singing the title-role on Opera Rara's forthcoming recording of a little-known verismo gem.

Zazà is Opera Rara’s first recording venture into the musical world of Leoncavallo and the operatic tradition of verismo. Maurizio Benini leads the BBC Symphony Orchestra and Ermonela Jaho in her recording debut as the eponymous Zazà. Jaho is joined by Riccardo Massis as her lover Milio; Stephen Gaertner as her onstage partner and former lover Cascart and Patricia Bardon as her mother Anaide.

Written in 1900 for the Teatro Liricio di Milano and conducted at its première by Toscanini, Zazà was Leoncavallo’s most popular opera after Pagliacci. In the 20 years following its première, Zazà received over 50 new productions in opera houses around the world. Opera Rara’s revival of Zazà is based on Leoncavallo’s own 1919 revision of his score which has been carefully researched by Maurizio Benini.

In this recording of the composer’s revised 1919 version of the accomplished score, conductor Maurizio Benini brings a light touch to his micro-management of BBC forces. Ermonela Jaho offers full emotional commitment, seizing the title role’s considerable opportunities. She’s finely partnered by Riccardo Massi as the duplicitous Milio, with Stephen Gaertner focused as her worldly-wise stage-partner Cascart

[Jaho’s voice] captures the character’s emotions powerfully…Massi sings with wonderful, old-school charm…Gaertner is eloquent and touching as Cascart…Bardon offers a vividly over-the-top performance as Anaide…Benini conducts with an easy feel for the score’s shifting moods and the BBC Symphony Orchestra play with real charm and affection. Fascinating, and recommended

Thoughtful preparation, imaginative casting and authoritative orchestral and choral execution under a conductor both widely experienced and specifically expert, in this case Maurizio Benini.

it’s a perfect vehicle for Ermonela Jaho...With her impassioned lyricism tempered by a hint of steel, she brings Zaza as vividly to life as she did Puccini’s tragic nun...the finest of the other singers is the American baritone Stephen Gaertner, as Zaza’s ex and singing partner, Cascart...vividly and idiomatically conducted by Benini.

In the concert last autumn, after which this studio recording was made, Ermonela Jaho gave a dazzling performance as Zazà...On disc Jaho is just as good, and Zazà’s character comes through vividly... Benini’s pacy conducting makes the BBCSO sound stylish and sumptuous.

Verismo is a new departure for this label, but this tragedy of lost love rivets thanks to Ermonela Jaho, magnetic in the title role.

[Jaho] surmounts every challenge...In fact, I can't think of another soprano today who suffers with such intensity. Riccardo Massi matches her well as the inevitable cad who ruins it all, and Stephen Gaertner uses his firm baritone to beautiful effect as Cascart...verismo might not be fashionable but it packs a punch, and Zazà is rather wonderful.

Jaho is a fresh, engaging artist who absolutely owns the title role: we need to hear more from her. As the two contrasted men in her life, Gaertner and Massi are close to ideal and Benini is hugely impressive in what is clearly a labour of love.