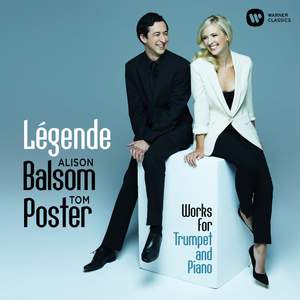 Works for Trumpet and Piano

They make a lovely sound together…I enjoyed the sweetness of Balsom’s muted tone in the central Sarabande of the Françaix and the way that even while articulating brilliantly through Goedicke’s... — Gramophone Magazine, July 2016 More…

Françaix: Sonatine for trumpet in C and piano

Hindemith: Sonata for Trumpet and Piano

Gershwin: Gershwin / Arr Turrin: Someone to Watch Over Me

Katherine talks to the trumpet-player about her first recital disc with piano, out now on Warner Classics.

“The trumpeter Alison Balsom has a rich Warner Classics catalogue, but this is her first CD recital with piano – here played by her long-standing recital partner, Tom Poster.

Balsom describes the programme as embracing “the most important repertoire for trumpet and piano” – taking a fascinating journey through 20th century works by such composers as Enescu, Hindemith, Martinů, Françaix, Bernstein and Maxwell Davies. That being said, the final piece on the official programme – preceding ‘American Songbook’ encores by George Gershwin and Jerome Kern – dates from the 21st century and was composed by the team of Balsom and Poster themselves. Called The Thoughts of Dr. May, it is inspired by another British musician: Brian May, lead guitarist of the rock band Queen – and also, as it happens, an astrophysicist.

The recital was recorded live at a concert at St George’s, an elegant former church, built in the 1820s by the architect of London’s Royal Opera House and located on a hillside in the city of Bristol in the west of England. Over the past 30 years it has become one of the country’s leading smaller concert halls for a diversity of musical genres – classical, jazz, folk, world music and opera. Alison Balsom explains that she has been wanting to record the programme for more than 10 years. Excited about making a live recording – a process she describes as pressured, yet focused – she would like to make more in the future.

She is full of praise for Tom Poster as a performing partner who seems to have an instinctive sense for what she is trying to achieve with each phrase. Poster explains that the pair of them decided to create The Thoughts of Dr. May because the repertoire for trumpet and piano is relatively small; the rhapsodic piece, built on a long-breathed melody, has grown organically over a number of years and is probably set to undergo further evolution and transformation as the duo performs it further in concert.

That sense of exploration and discovery is symptomatic of Balsom’s open and imaginative approach to making music. “I have really eclectic taste in music and it’s interesting to see where that takes me,” she says. “The trumpet is one of the most versatile instruments … I realised from early on that it wasn’t just a trumpet, it was a voice that could seemingly do anything. You can play almost any genre. I used to be jealous of those musicians who had Brahms and Beethoven, but actually now I see the limitation of the trumpet repertoire as an opportunity to go down paths that people haven’t explored before and I relish that. I don’t need to feel that everything I’m performing and recording has been done brilliantly by others many times in the past … You need to have your own unique message to convey. Of course it’s really important to have your own distinctive sound, and the trumpet is one of those instruments where you can – it is very much about the player’s lips, embouchure and breathing. Even more important than that is your idea of what you want to sound like, your idea of yourself.”

They make a lovely sound together…I enjoyed the sweetness of Balsom’s muted tone in the central Sarabande of the Françaix and the way that even while articulating brilliantly through Goedicke’s Concert-étude, she can make her lines sing

Balsom’s sotto voce playing is delicious, and the recording is nicely balanced.