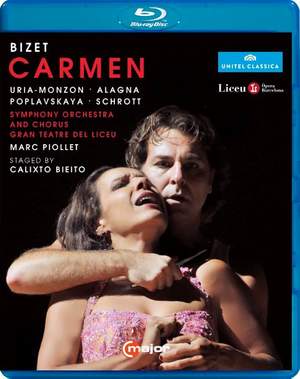 In this prestigious production at the Gran Teatre del Liceu, world-famous and highly controversial stage director Calixto Bieito, admired for his raw and evocative stagings, sees in Carmen the embodiment of the mythical gypsy and touches upon sensitive issues such as racism, xenophobia and right-wing politics. Bieito conjures up a sensual and realistic atmosphere full of powerful symbolism.

An outstanding quartet of vocal stars, led by a “splendid and sensual” (El Periódico) Béatrice Uria-Monzon in the title role, delivers one of the most exciting Carmens in recent years: Roberto Alagna as Don José, Erwin Schrott as Escamillo and Marina Poplavskya as Micaëla.