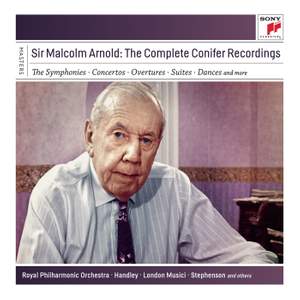 A welcome return to the catalogue for this survey of Arnold’s orchestral music. — Gramophone Magazine, June 2016

Arnold: Fantasy on a Theme of John Field, for piano & orchestra, Op.116

Arnold: A Flourish for Orchestra, Op. 112

”One of the most prolific British composers of the 20th century, Sir Malcolm Arnold remains best known for his phenomenal success in film (including an Oscar for his score for David Lean’s 1957 classic The Bridge on the River Kwai) and light music, a broad selection of which is included in Sony Classical’s new 11-CD anthology along with 11 concertos. But the heart of his output, the works he regarded as his testament, are the nine symphonies, composed at fairly regular intervals between 1949 and 1986, with musical influences ranging from Holst and Vaughan Williams to Tchaikovsky, Mahler and Sibelius. Vernon Handley’s recordings from the 1990s, many of them made in the composer’s presence, are a touchstone for this repertoire. As Gramophone declared: “It’s Handley who best conveys the sinewy logic and thrusting cogency of Arnold’s symphonic odyssey.”

A welcome return to the catalogue for this survey of Arnold’s orchestral music.