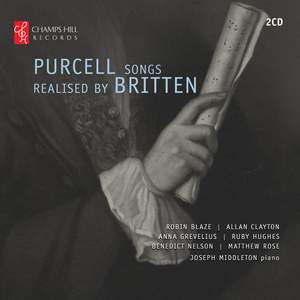 The singers steer a convincing stylistic course, balancing the sometimes contradictory demands of the source material and the arrangement…Middleton’s playing is precisely coloured and characterised — BBC Music Magazine, June 2016, 4 out of 5 stars More…

Purcell: In the black dismal dungeon of despair, Z190

Purcell: We sing to him, whose wisdom form'd the ear, Z199

Purcell: The Indian Queen, Z. 630: I Attempt from Love’s Sickness to Fly

Purcell: How blest are the shepherds (from King Arthur)

Purcell: Let the Dreadful Engines of Eternal Will, Z. 578

Purcell: If music be the food of love Z379A

Purcell: On the brow of Richmond Hill Z405

Purcell: Hears not my Phillis how the birds ('The Knotting Song'), Z371

Joseph Middleton leads an exceptional group of singers in a new 2-CD anthology of Benjamin Britten’s realisations of the songs of Henry Purcell.

Middleton writes that: “priceless to subsequent generations of performers, the result of the Purcell/Britten marriage wedded the greatest British Baroque composer with the 20th century’s finest British song composer in a totally idiosyncratic, vivid and bold way. As Britten wrote, his intention was to ‘apply to these realizations something of that mixture of clarity, brilliance, tenderness and strangeness which shines out in all Purcell’s music,’ Of course the same adjectives can just as well be applied to Britten’s writing.”

This marks the 100th release by Champs Hill Records, an independent label that since 2010 has firmly established its commitment to releasing recordings by young artists and new or under-represented repertoire, most of which (as with this recording) comes from their private 160-concert hall in West Sussex.

The singers steer a convincing stylistic course, balancing the sometimes contradictory demands of the source material and the arrangement…Middleton’s playing is precisely coloured and characterised

The mellifluous Allan Clayton and pianist Joseph Middleton make no apologies for it. The colours they bring to the music are unashamedly Romantic and Middleton, whose vivid playing is a catalyst throughout the disc, lets himself go in Britten’s scene-painting…for Purcell, I will still look to period performances. For Britten, this counts as a highly persuasive new release.

The vocal styles vary rather widely, from early music, in Ruby Hughes’s shining Fairest Isle and Robin Blaze’s pure Sweeter than Roses, to full-on in the magnificent bluster of Matthew Rose, who brings Britten’s version of Music for a While to a huge climax. There are fun ensembles too.

There is no weak link among the singers, although Clayton’s tenor and Rose’s rich bass especially impress. Common to all, of course, is pianist Joseph Middleton, refined and adept, for whom this is clearly a labour of love. Excellent recorded sound.