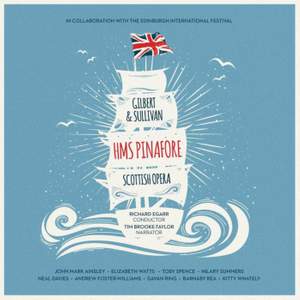 IX. 9. Act I, Chorus of Women. Over the Bright Blue Sea

X. 10. Act I, Chorus of Sailors and Relatives. We Sail the Ocean Blue

XI. 11. Act I, Recitative, Song and Chorus. I Am the Monarch of the Sea

XVI. 16. Act I, Finale. Can I Survive This Overbearing

XIX. 19. Act II, Duet. Things Are Seldom What They Seem

XXI. 21. Act II, Trio. Never Mind the Why and Wherefore

Katherine enjoys a new recording of a well-loved light-opera classic, with Richard Egarr and Scottish Opera (and featuring Tim Brooke-Taylor!)

The conductor and harpsichordist talks to Katherine about his new, historically-informed recording of Gilbert & Sullivan on Linn.

Richard Egarr conducts the Scottish Opera in Gilbert and Sullivan’s much-loved nautical comic opera: HMS Pinafore. Performed and recorded live at the 2015 Edinburgh International Festival to a sold out audience, the story unfolds with additional narration from comic actor and broadcaster Tim Brooke-Taylor. Heading up a cast that reads like a ‘who’s who’ of the opera world are John Mark Ainsley, Elizabeth Watts and Toby Spence.

The well-crafted, yet light-hearted story unfolds on the HMS Pinafore as Josephine, the captain’s daughter, falls in love with a lowly sailor (Ralph Rackstraw) despite arrangements by her father to marry Sir Joseph Porter. Sir Joseph is a perfect caricature of Britain’s class system of the day – a pompous and splendidly incompetent man. Nevertheless, this likeable character decrees his liberal views and inadvertently encourages a couple in love to reject social conventions and elope. A tale of British silliness, filled with British humour, ends happily for all characters.

Egarr applies his extensive knowledge of period performance practice to recreate the sound and style typical of the late nineteenth century, a first for a Gilbert and Sullivan recording. HMS Pinafore is rich in comic burlesque, sending up theatrical and operatic conventions and parodying the Italian opera of the day. The tongue-in-cheek writing is apparent from the opening chorus and the music is equally rich in comic pastiche and styles; ‘For he is an Englishman’ is one of the greatest master-strokes.

Climb aboard the HMS Pinafore for a hugely fun seafaring romp!

It sounds like everyone involved was having a lot of fun. Richard Egarr, for example: who knew that he was such an affectionate Savoyard?...It was clearly one of those occasions where everyone plays off each other, and with a cast like this, the results are never less than engaging.

The whole presentation is well-rehearsed and the orchestra is excellent. It was nice to see that Scottish Opera follow the D’Oyly Carte with the need for excellent diction… . In many a recording we find there are woodwind lines that fail to come across, but here there is absolute clarity from every section.

The Scottish Opera chorus sings with energy and commitment, and the cast is a formidable assemblage of top UK talent. Diction is good, and the cast generally avoids the temptation to ham.

There’s a tremendous sense of affection and conviction from all involved, and never a suggestion of anyone condescending to the material...Egarr brings out some wonderful orchestral detail which I’d never noticed before (particularly in the big ensembles), and phrases everything with such line and lyricism that any sense of that ‘rum-ti-tum’ autopilot which often repels Gilbert and Sullivan's detractors is kept consistently at bay.

[Egarr proves] himself a natural for this repertoire; the whole thing bounces, sparkles and smiles, with Scottish Opera's orchestra playing with the insouciant grace that is such a crucial element of operetta style. The cast is splendid...Elizabeth Watts is a gorgeous Josephine, Andrew Foster-Williams makes a perfectly proper Captain Corcoran and Hilary Summers's warm contralto is nicely suited to Little Buttercup.

Gilbert's satire...still resonates, and was a gift for Sullivan's talent for parodying Italian opera. That and its native tunefulness keep the score fresh, as this Scottish Opera performance under Egarr, recorded live at last year's Edinburgh International Festival, happily reminds us.