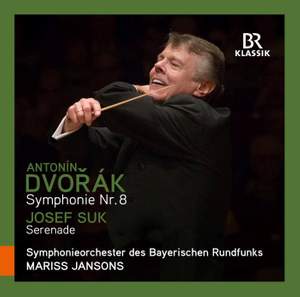 Tempi are relaxed and phrases are lovingly caressed, dabbed with generous applications of rubato…another virtue is the sheer beauty of the Bavarian Radio Symphony Orchestra’s playing, not only... — Gramophone Magazine, July 2016 More…

Dvořák's lyrical and cheerful Eighth Symphony, which premiered successfully in Prague on February 2, 1890, is one of the famous Bohemian composer's most often-played works. He succeeded here "in writing a work different from my other symphonies, with individual thoughts elaborated in a new way". Every movement and every melody in this music reflects the fact that it was wholly inspired by the landscape of Bohemia. Dvořák's close familiarity with and love of Slavonic folk music can be clearly heard, as can his deep preoccupation with the symphonies of Tchaikovsky: the rhapsodic Adagio and the waltz-like Scherzo, for example, in their melodic inventiveness as well as their formal structure, are both highly reminiscent of the famous Russian composer. – Alongside Dvořák's much-performed Ninth Symphony, his Eighth is a further masterpiece of late 19th-century instrumental music. Josef Suk's Serenade for Strings of 1892 is far more than a mere time-filler on this CD. The first successful composition by this budding Czech composer – who was Dvořák's pupil and son-in-law – is audibly influenced by the musical and aesthetic ideas of his teacher and mentor, but is also a highly individual work in its own right and an important example of the genre. In the recordings of the two concerts performed in the Philharmonie im Gasteig on January 29 and 30, 2016, the Symphonieorchester des Bayerischen Rundfunks under Mariss Jansons successfully demonstrated that Dvořák's traditional yet visionary symphonic writing continues to retain all its validity today: the interpretation is sensitive, dynamic and majestic. Suk's Serenade for Strings was recorded in a studio only a few days beforehand.

Recording of a concert that took place as recently as January 29 and 30, 2016 together with a studio production on January 25, 2016

The Symphonieorchester des Bayerischen Rundfunks under its chief conductor Mariss Jansons, regularly praised for his special sensitivity where Slavonic music is concerned.

Tempi are relaxed and phrases are lovingly caressed, dabbed with generous applications of rubato…another virtue is the sheer beauty of the Bavarian Radio Symphony Orchestra’s playing, not only in terms of tonal refinement but internal balance