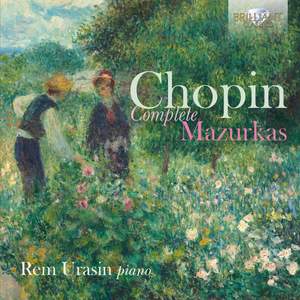 The Mazurka is a Polish folk dance in ¾ metre, the first “composed” examples going back to the middle of the 18‐th century. It became a symbol of Polish patriotism, expressing the indomitable Polish identity and vitality.

Chopin’s Mazurkas are “not meant to be danced” as he himself declared. They are highly artistic, harmonically complex miniatures, expressing the deeper human feelings of joy and exultation, but also melancholy and despair. Chopin wrote them during his whole lifetime, from youthful scribblings to highly sophisticated late works.

Russian pianist Rem Urasin (born 1976) specialised in Chopin, having played all his works in concert. He won 4th Prize at the International Chopin Competition in Warsaw in 1995 and First Prize in the Moscow Chopin Competition. He was a pupil of the great Lev Naumov.