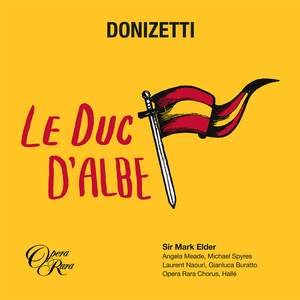 Katherine talks to the American tenor about his career to date and his role on Opera Rara's new recording of Donizetti's Le Duc d’Albe.

Opera Rara has decided here only to record what is largely Donizetti’s own music, which means just the first two acts…so what we have is but a torso, tantalising and inevitably positing several major what-ifs. And it’s all the more tantalising since the first two acts are dispatched with all the style and élan we’ve come to expect from Mark Elder in this music, here with the Hallé. He brings conviction, stylistic nous and a wonderful airy clarity to the score.

Elder's complete command of Donizettian atmosphere...and pacing...makes it clear that the essential grand opera conflict...stimulated the composer to even greater directness and iommediacy...than are apparent at the start of Les Martyrs...[Spyres] produces a peerless combination of eloquent French utterance. fearless musicianship and unfailingly beautiful tone.

the score’s so involving and appealing, and the performance so gripping that I won’t pretend I wasn’t dreaming of what Donizetti might have done with dramatic denouement...With a big, bright, mettlesome instrument that easily encompasses the role’s wide range, American soprano Angela Meade is formidable as Hélène...it’s hard not to be knocked sideways by the sheer vocal charisma of Michael Spyres.

Certainly, this recording is worth hearing, above all for the thrilling male leads. Is there a better tenor today than Michael Spyres? He makes Henri’s fiendish music sound easy. Laurent Naouri as the Duke and Gianluca Buratto as the Flemish leader, Brauer, are superb, too.

under Mark Elder’s propulsive baton, the highlights keep coming...Spyres’s clarion tenor shines throughout as Henri. Angela Meade’s soprano is squally in Hélène’s act one rabble-rousing, but commanding in all the right ways in act two, and Laurent Naouri and David Stout are excellent as the Duke and his snarling henchman.