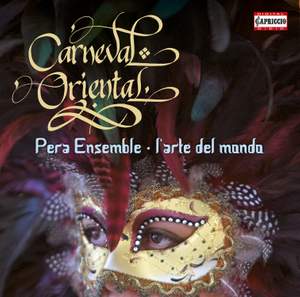 After the final siege of Vienna in 1683 and the defeat of the Turks, the Ottoman Empire was no longer a threat. In private circles, people began to wear pantaloons, caftans and turbans, enjoyed Turkish drinks, and smoked hookahs. The Alla Turca fashion found expression in Turkish-themed operas. Mozart’s The Abduction from the Seraglio is probably the best-known example of this, but dozens of operas, arias and instrumental works on the subject had already been produced, starting in the early 17th century.

Our Carneval Oriental project takes its inspiration from this melting-pot of cultures representing an exclusive blend of musical worlds. We celebrate the Istanbul carnival as it was probably done in the 16th and 17th centuries. The Pera Ensemble has been rediscovering these Orient-Occident encounters, Turkish fashions and Alla Turca music for many years. It now teams up with the ensemble l’arte del mondo to offer French and Italian baroque music with a refined oriental flavour, comprising arias and instrumental music from a new world of sound.