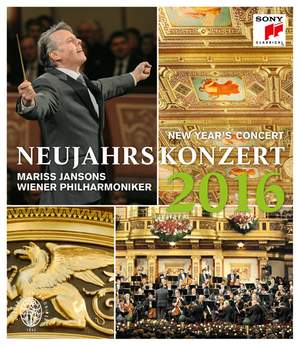 Here is music and music-making in which elegance, dash and lightness of spirit sit side by side with pools of emotional quiet which can haunt the mind for days to come. — Gramophone Magazine, March 2016

As a brand name, the Vienna New Year’s Concert can trace back its origins to 31 December 1939. In other words, the concert initially took place on the last day of the year. By 1941, however, it was being held on 1 January, when the Vienna Philharmonic established a tradition that continues to flourish to this day.

It is not least thanks to this illustrious succession of great conductors that the Vienna New Year’s Concert remains unique, ushering in the New Year in a way that has often been imitated but never equalled. Its universal popularity is undoubtedly due to the direct – or deferred – live broadcast from the flower-filled Golden Hall of the Vienna Musikverein. The first broadcast went out on Eurovision in 1959, the first colour relay in 1967. Now the concert is shown in countries throughout almost the entire world.

It continues to be works by members of the Strauss family – Johann Strauss Father and Son as well as Eduard and Josef Strauss – that are central to this media event. Old favourites from their output are heard alongside others that have never been recorded or are only rarely heard; all of them programmed around two fixed points in the concert: the Blue Danube Waltz and the Radetzky March.

Mariss Jansons ranks among the outstanding podium personalities of our time. He has been the Chief Conductor of the Chor und Symphonieorchester des Bayerischen Rundfunks since 2003. After several exceptionally successful seasons, his contract was prolonged until 2018. Until recently he was also the chief conductor of the Koninklijk Concertgebouworkest in Amsterdam (2004-2015) and held both prestigious positions of a chief conductor at both orchestras. Both ensembles made the top 10 in a 2008 Gramophone list of the world's top 20 orchestras.

Here is music and music-making in which elegance, dash and lightness of spirit sit side by side with pools of emotional quiet which can haunt the mind for days to come.