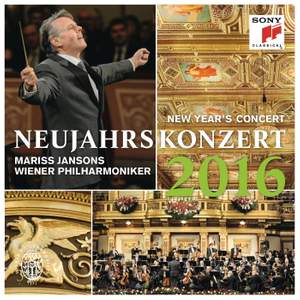 Here is music and music-making in which elegance, dash and lightness of spirit sit side by side with pools of emotional quiet which can haunt the mind for days to come — Gramophone Magazine, March 2016

The New Year’s Concert live from Vienna is one of the world’s most famous and spectacular classical music events. It will be broadcast on TV and radio and reaches over 90 countries around the world with more than 40 million viewers. The live recordings from this event with works from the Strauss dynasty and their contemporaries are among the classical market's most important releases. After widely acclaimed New Years Concerts in 2006 and 2012, world-class conductor Mariss Jansons returns for the third time. He belongs to the circle of conductors with whom the Vienna Philharmonic feels a special bond and collaborates regularly.Mariss Jansons ranks among the outstanding podium personalities of our time. He has been the Chief Conductor of the Chor und Symphonieorchester des Bayerischen Rundfunks since 2003. After several exceptionally successful seasons, his contract was prolonged until 2018. Until recently he was also the chief conductor of the Koninklijk Concertgebouworkest in Amsterdam (2004-2015) and held both prestigious positions of a chief conductor at both orchestras. Both ensembles made the top 10 in a 2008 Gramophone list of the world's top 20 orchestras. Marketing activity. DVD & Blu-Ray formats released laer in January.

Here is music and music-making in which elegance, dash and lightness of spirit sit side by side with pools of emotional quiet which can haunt the mind for days to come