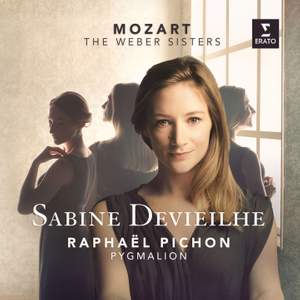 the concert-aria and operatic readings themselves are gems, each one thrown off with a splendid combination of technical brilliance, musicianly assurance and tonal sweetness, and impeccably supported... — BBC Music Magazine, February 2016 More…

Mozart: Musik for the Pantomime Pantalon and Columbine, K. 446: Adagio

Recording of the Week,  Vocal Recitals from Sabine Devieilhe and Véronique Gens

Once again, Sabine Devieilhe is telling a love story in music – this time with the help of Mozart. The scintillating French soprano’s debut album on Erato, Le grand théâtre de l’amour, created a fictional narrative with music by Rameau. By contrast, Mozart - The Weber Sisters is rooted in Mozart’s life story and includes music inspired by Aloysia, Konstanze and Josepha Weber, three soprano sisters whom Mozart first met in the German city of Mannheim in 1777, when he was 21. Though he initially fell in love with Aloysia, who went on to become a celebrated diva, it was Konstanze who became his wife; she outlived him by nearly 50 years and did much to sustain and build his reputation after his death.

The programme of Mozart - The Weber Sisters comprises songs, operatic and concert arias and orchestral numbers, and Sabine Devieilhe’s interpretations are typified by beauty of tone, a penetrating sense of drama and a scrupulous respect for the score and the text. Three of the highlights are: the concert aria ‘Popoli di Tessaglia’ – written for Aloysia – which rises to spectacular heights (specifically, the G two-and-a-half octaves above middle C); the sublime ‘Et incarnatus est’ from the C minor Mass – premiered in Salzburg by Konstanze, and ‘Der Hölle Rache’, written for Josepha as the second fireworks-filled aria of the Queen of the Night in Die Zauberflöte, a role that has brought triumphs for Sabine Devieilhe at the opera houses of Lyon and Paris. Her colleagues on this album are the Ensemble Pygmalion, the keyboard player Arnaud de Pasquale and the conductor Raphaël Pichon.

Sabine Devieilhe, still in her twenties, has been described as a singer “whose upper register, like her virtuosity, appears limitless, while her verbal sense and dramatic engagement are breathtaking”. In France, she has twice been recognised in the prestigious Victoires de la Musique Classique awards, in 2013 and 2015, and Le grand théâtre de l’amour – praised by Opera magazine as “a wonderfully vivid display of first-class Rameau interpretation” – was shortlisted for a Gramophone Award in 2014.

On the opera stage, her other roles have included Serpetta in Mozart’s La finta giardiniera, Euridice in Gluck’s Orfeo ed Euridice, Soeur Constance in Poulenc’s Dialogues des Carmélites, the Princess, Fire and Nightingale in Ravel’s L'enfant et les sortilèges, and the title role in Delibes’ Lakmé, which she has performed in Montpellier and at the Opéra Comique in Paris, prompting Le Figaro to write: “Her name will immediately go down in history. It is hard to know what to admire most: her technical facility, her vocal agility or her magnetic presence. Of course, it is the combination of all those elements that makes such an impact. Her virtuosity is never an end in itself … her voice is homogenous – devoid of any touch of acid – her vocal line is always musical, and she brings an acute sensitivity to her portrayal.”

Another, quite different role she has sung at the Opéra Comique is Adele in Johann Strauss’ Die Fledermaus. That character, created nearly 100 years after Mozart met the Weber sisters, is a Viennese chambermaid with a cheeky sense of humour. Mozart himself was known for enjoying a little scurrilous fun and – at the end of a predominantly serious programme – Sabine Devieilhe and the Ensemble Pygmalion regale the listener with an unlisted ‘hidden track’ that has a distinct twinkle in its eye.

the concert-aria and operatic readings themselves are gems, each one thrown off with a splendid combination of technical brilliance, musicianly assurance and tonal sweetness, and impeccably supported by the period-instrument band

The programme centres around three magnificent showpiece arias for Aloysia, famed both for her expressive cantabile and her coloratura prowess, Among her specialities were sustained pianissimo high notes; and I can't imagine they were more delicately floated than they are by Sabine Devieilhe, a lyric coloratura who combines a pure, sweet timbre and dazzling virtuosity.

It's a rare singer who can command your attention by opening a disc with what's essentially 'Baa baa black sheep', but Mademoiselle Devieilhe does precisely that...Devieilhe possesses all the apparent virtues of Josepha and Aloysia, both of whom were renowned for their prodigious agility and stratospheric upper registers: she despatches the Queen of the Night's aria with aplomb, even managing an echo effect and a true 'eh' vowel on the top Fs.

irresistibly good Mozart singing...Expressive and incisive, Devieilhe is in command of everything...Devieilhe’s account of the famously stratospheric Die Hölle Rache is exceptional. Even amid a recent glut of classy Mozart vocal recordings, this stands out.