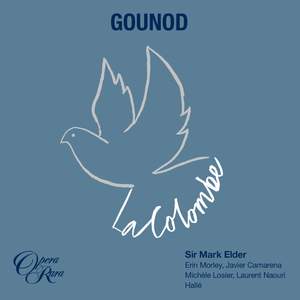 Following his award-winning recording of Donizetti’s Les Martyrs, Sir Mark Elder’s second Opera Rara release of 2015 features an rare recording Gounod’s delightful opera La Colombe ("The Dove”). Sir Mark and the Halle Orchestra are joined by a wonderful cast, led by two of the most acclaimed young singers in the world today.

Since graduating from the Metropolitan Opera’s Lindemann Young Artist Development Program in 2010, Erin Morley has risen to become one of today’s most most sought after coloratura sopranos. Alongside Erin is Mexican tenor Javier Camerena, one of only three singers in 70-years to sing an encore at the Metropolitan Opera during two consecutive performances of Rossini’s “la Cenerentola” (those two other encore singers were Juan Diego Florez and Luciano Pavarotti).

One hero of this admirable Opera Rara release is Mark Elder, utterly committed to Gounod's score and coaxing elegant music-making from the Hallé. There's also some properly idiomatic singing, as you'd expect from a veteran like Laurent Naouri…best of all is the young Mexican tenor Javier Camarena as Horace.

Javier Camarena has made a mark principally in Italian bel canto roles but as Horace deals ably with Gounod’s lyrical demands, although the voice can turn metallic. Erin Morley offers a splendid portrayal of the capricious Sylvie which appealingly balances the countess’s assertive moments, including a brilliant waltz (a genre in which Miolan-Carvalho specialized), with some lovely expressive singing. All unfolds smoothly under Mark Elder’s affectionate leadership.

Michèle Losier is marvellous in the trouser-role of Mazet, Horace’s misogynistic servant: his/her manic tirade against womanly wiles is a real highlight, but she also has great rapport with Camarena’s high tenor...Laurent Naouri is all haughty Gallic flair as Sylvie’s epicurean majordomo...But the palm goes to the American coloratura soprano Erin Morley, who’s an absolute knock-out as the spoilt girl-about-town Sylvie.

La Colombe is clearly not a profound work, but it is well filled with the kind of ingratiating tunes that Gounod could turn out so effectively. Elder’s performance has just the right light touch too, always keeping its tongue ever so slightly in its cheek...Modest though it is, a rarity like this couldn’t be served much better by a recording.