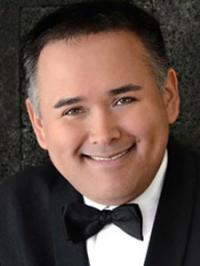 Javier Camarena was born in Xalapa, Mexico in 1976, and made his professional operatic debut in Mexico City in 2004 as Tonio in Donizetti’s La fille du Régiment; it would become one of his signature-roles, alongside Fenton in Verdi’s Falstaff and Elvino in Bellini’s I Puritani.

He made his Metropolitan Opera debut in 2011 (as Almaviva in Il barbiere di Siviglia) and in 2014, he became only the third singer in seven decades to sing an encore at the house, during a performance of Rossini’s La cenerentola – the aria, ‘Si, ritrovlarla io giuro’, features on his debut solo recording Contrabandista, released on Decca in 2018 as the inaugural album on the ‘Mentored by Bartoli’ label. Camarena has worked regularly with the Italian mezzo on stage and in the studio; he sings a small role on her 2008 recording of Bellini’s La sonnambula, as well as Rodrigo to her Desdemona in Rossini’s Otello and the Count to her Adele in his Le comte Ory (both from Zurich Opera House, and available on DVD).

Find out more at https://en.wikipedia.org/wiki/Javier_Camarena