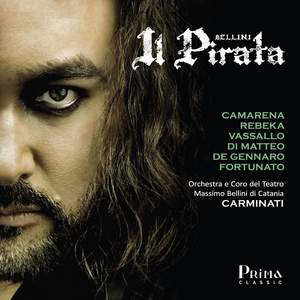 [Rebeka] displays a nimble coloratura from a voice that sits happily in the middle register but with a nice ripe top...A word of praise, too, for the villainous baritone Ernesto. Franco Vassallo... — BBC Music Magazine, December 2021, 4 out of 5 stars More…

The Latvian soprano and Italian baritone discuss their roles as Imogene and Ernesto in Bellini's early opera, recorded last summer in the composer's native Catania and released on Rebeka's own label Prima Classic last month.

This new studio recording of Bellini's Il Pirata in its uncut version includes all the repetitions, original cadenzas and variations written by the singers, as well as the rarely performed finaletto. Prima Classic's aim is to present to the public this masterpiece of composition, beauty, and of incredible technical demands on the soloists, performed by some of the most prominent singers of today. With Javier Camarena, Marina Rebeka, and Franco Vassallo performing the leading roles, this album was recorded at Bellini's homeland, Catania, with the Orchestra e Coro del Teatro Massimo Bellini, under the baton of Fabrizio Maria Carminati.

This relatively rarely performed opera stands out in the bel canto repertoire for its original musical resources applied by a young but undeniably genius Bellini, who was pushing the limits of the musical traditions of his time. Particularly original is the chorus of the Pirates with the echo effect: this genial page drew a clamorous success and was defined by a critic at La Scala "...a masterpiece of musical science". A mature Rossini told Bellini in a brief meeting they had in August 1829: "I have known in your operas that you begin where others have ended."

[Rebeka] displays a nimble coloratura from a voice that sits happily in the middle register but with a nice ripe top...A word of praise, too, for the villainous baritone Ernesto. Franco Vassallo eschews eyerolling melodrama in search of a character who is genuinely divided against himself.

Rebeka sings with a mixture of beauty and dramatic intensity. In its upper register her tone can turn a bit hard, but she uses this to dramatic effect. She sings with the kind of forceful theatricality and rhythmic incisiveness that music like this requires. She portrays Imogene’s madness tellingly, and at the same time shapes Bellini’s melodies firmly.

At her best in the finale to Act 1 and later sections, [Rebeka] rises to the immense challenges of her final scene...Light in vocal weight and colour, Javier Camarena delivers Gualtiero’s text with clarity and purpose, negotiating the notes with aplomb and a sense of style...The most consistent of the three principals is Franco Vassallo’s firm and tensile Ernesto, whose deliberate colouring of text is highly effective.

With his light, supple and still very youthful voice, Javier Camarena is an ideal interpreter of the title role. Marina Rebeka interprets Imogene expressively and with dramatic impetus. With his rich baritone, Franco Vassallo is a very impressive Ernesto. All the other roles are well cast, and there are also good performances from the orchestra and chorus of the Teatro Massimo Bellini that all add up to make this recording a real treat.