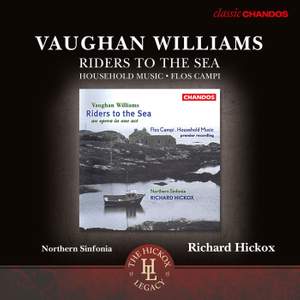 A one-act opera based on the play of the same name, Riders to the Sea is a straightforward tragedy that pits helpless humans against the remorseless sea of Galway Bay. Richard Hickox leads the... — Presto Classical, June 2014 More…

Act I: Where is she? (Nora, Cathleen)

Act I: Isn't it turf enough you have for this day and evening? (Maurya, Cathleen, Nora)

Act I: Where is the bit of new rope, Cathleen (Bartley, Cathleen, Nora, Maurya)

Act I: You didn't give him his bit of bread? (Cathleen, Maurya)

Act I: I went down to the spring well (Maurya, Nora, Cathleen)

Act I: They are all gone now (Maurya, Nora)

Act I: And may he have mercy on my soul (Maurya, Chorus)

I. Sicut Lilium inter spinas (As the lily among thorns)

II. Jam enim hiems transiit (For, lo, the winter is past)

III. Quaesivi quem diligit anima mea (I sought him whom my soul loveth)

VI. Pone me ut signaculum super cor tuum (Set me as a seal upon thine heart)

As he proved with his recording of A London Symphony – Record of the Year, Gramophone Awards 2001 – Richard Hickox was a Vaughan Williams specialist. This reissue of an original 1995 recording features such lesser known works from the composer as Household Music and Flos Campi.

Alternating between the passionate and the tortured, between long-breathed lyricism and moments of obvious pain, Flos Campi has never really found itself in the mainstream concert repertoire, maybe because of its title, misleadingly suggesting jolly music. Household Music has equally suffered from its title, rather an off-hand one for pieces that at their best show the composer’s brilliance as an arranger. Riders to the Sea, however, is a masterpiece, seen as the finest as well as the most concentrated of Vaughan Williams’s works for the stage, conjuring up multiple layers of emotional response to the natural world, a losing battle with the sea, and the God which rules it, for the islanders in the North Atlantic.

A one-act opera based on the play of the same name, Riders to the Sea is a straightforward tragedy that pits helpless humans against the remorseless sea of Galway Bay. Richard Hickox leads the Northern Sinfonia and Chorus; Ingrid Attrot is starkly compelling as Maurya, the central character who faces disaster and loss at the hands of the merciless waves.