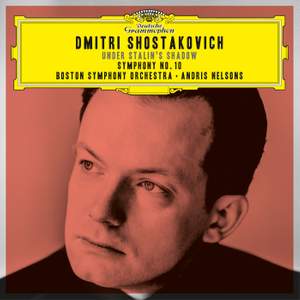 Shostakovich Under Stalin's Shadow: Symphony No. 10

Powerful and beautifully crafted, this recording – the first from the relationship between DG and the Boston Symphony under Nelsons – is a hugely impressive sign of just what this ensemble/maestro... — Gramophone Magazine, August 2015 More…

This recording marks the first instalment of a long-term collaboration with one of the most exciting young conductors of our time: Andris Nelsons the newly appointed Music Director of the Boston Symphony Orchestra.

The goal of this massive undertaking is a complete Shostakovich cycle on Deutsche Grammophon with the Boston Symphony Orchestra. The core of which - Symphonies Nos. 5-10 - is scheduled for recording and release over the next two years.

Andris Nelsons has had a long journey with Shostakovich. He is one of the last conductors of his generation who still grew up in the Russian and, more especially, the Soviet musical tradition ever since he started his training as a conductor. He studied in St Petersburg with Alexander Titov and also with Mariss Jansons. His new orchestra has had a great tradition in performing many of Shostakovich’s works in America for the first time.

The theme of the first album with Shostakovich´s 10th Symphony and Passacaglia from Lady Macbeth is a reflection on Shostakovich and Stalin. Lady Macbeth was the piece which brought criticism of his work and the radical change of style, whereas Symphony 10 is from the year Stalin died: the long arc of censorship of Shostakovich until Stalin's death, and the composer's response to this.

Powerful and beautifully crafted, this recording – the first from the relationship between DG and the Boston Symphony under Nelsons – is a hugely impressive sign of just what this ensemble/maestro partnership may go on to achieve.

I’ve heard scratchier strings, raspier brass and screechier woodwind in this music, but what intrigued me was the impact of Nelsons’s relatively restrained energy and his resistance to caricature...It may sound perverse to praise an interpretation of this particular work for its introspectiveness, but bear with me: the nightmarish scherzo somehow speaks of internalised, psychological terror rather than Terror With A Capital T here.

We shall never know whether the second movement is, indeed, a “portrait” of Stalin, but it undoubtedly is a depiction of tyranny in music, electrifyingly played here. The 10th is the main work of the BSO’s first programme, and the recording certainly whets the appetite for the rest of the series.

Don’t press play without checking the volume levels first: Andris Nelsons and the Boston Symphony Orchestra begin their new Shostakovich series with the Passacaglia from the opera Lady Macbeth of Mtsensk, and its first chord is genuinely cataclysmic...It at once recalibrates your ears and sets the tone for the ensuing performance of the 10th Symphony.

Nelsons triumphs overwhelmingly, crafting the long first movement with a mix of probing strength and disquiet, and elsewhere combining whiplash rhythmic incisiveness with breadth of phrasing and a telling spectrum of dynamics. With the apocalyptic tragedy of the Lady Macbeth passacaglia, the cumulative effect of this disc is both profoundly moving and electrifying

Nelsons excels at building momentum and paces [the first movement] masterfully...If that level of dramatic engagement isn’t quite sustained, it’s partly because the glamorous sound of the orchestra, caught live in Boston, sometimes contradicts Nelsons’s own assertions about the piece...Put that to one side and this is thrilling music-making, already whetting the appetite for the next instalment