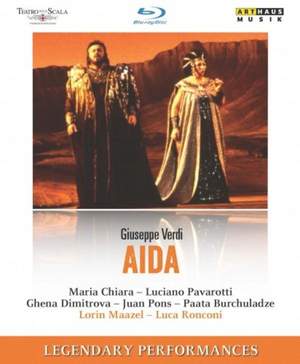 "An opera for Cairo!", Verdi is said to have exclaimed. He would certainly have been delighted with this magnificent production. It was a triumphant success when it opened at la Scala in December 1985 and Luciano Pavarotti's long-awaited performance as Radames - his first in Italy - was greeted with rapturous applause.

In this live recording of that production, Pavarotti heads an exceptional cast with Ghena Dimitrova, Maria Chiara and Juan Pons all in peak form.

Lorin Maazel's reading of the score shows a rare understanding of Verdi's music.