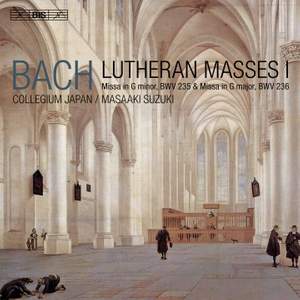 By Bach's time, the Reformation had fundamentally altered the traditional forms of church service, and in German churches Latin had yielded to the country's own language. To a limited extent, however, the Latin mass text did remain in use in the Protestant church – in particular the Kyrie and Gloria sections, which were often set to music as an entity in their own right. Albeit incomplete, this form of mass setting was termed ‘Missa’, a name it retained even in Bach’s day. Nowadays, to differentiate them from complete settings, these pieces are often referred to as 'Lutheran Masses'. Bach's famous Mass in B minor, later expanded into a complete mass, began its existence as a work of this type, and four other examples from Bach's pen have survived. They all make extensive use of earlier compositions, and the two masses on the present disc consist entirely of so-called parodies: reworkings of arias and choruses from cantatas, in which Bach demonstrates his skill in adapting existing music for new uses. Performed by Bach Collegium Japan – who under the direction of Masaaki Suzuki have already recorded the original settings as part of their acclaimed cantata series – the Missae BWV 235 and 236 are here combined with four separate settings of the Sanctus, another section of the traditional mass that in Bach's time could be heard in the churches of Leipzig during important feast days. Two of these are original compositions, whereas BWV 241, and possibly also 240, is an arrangement of a setting by another composer. The 'Kyrie – Christe' BWV Anh. 26 is also an example of how Bach in his task of providing the music for church services used music by other composers. In this case he turned to a movement from a mass by his contemporary Francesco Durante from Naples, but adapted it for his own purposes by composing a new setting – a duet for soprano and alto – of the Christe eleison section, labelling it 'Christe di Bach' in his autograph.

Suzuki and his disciplined singers and instrumentalists bring a pleasingly light touch to the dance-like Kyrie opening chorus of BWV235...In short, notwithstanding occasional choral rough edges, there are few disappointments.

Suzuki's solo 'A team' are out in force and generally deliver excellent and communicative quasi-arias...The choruses are perhaps a touch less well-heeled and defined than usual, in both consistency and balance, but Collegium Musicum Japan compellingly advocate both Masses as well as the festive Kyrie and Sanctus settings.