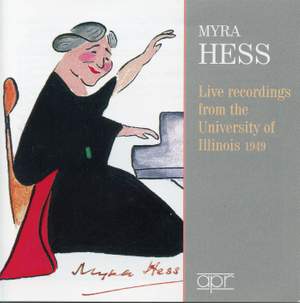 Myra Hess: Live at the University of Illinois

This has been an outstandingly successful series of discs – the quality of the transfers, given some intractable problems, has been generously, often triumphantly high…the series has both expanded... — MusicWeb International, May 2015 More…

Piano Concerto in A Minor, Op. 16: I. Allegro molto moderato

These three discs devoted to Myra Hess in concert feature two complete recitals recorded at Illinois University on 17 and 18 March 1949 and are the only live recital recordings by the pianist known to exist.

Each evening featured solo works followed by a concerto and also included various encores, but as the programmes are each too long to fit on a single CD we have instead coupled the concertos together and arranged the solo works into musical groupings (sadly it proved impossible to locate a copy of the Beethoven ‘Tempest’ Sonata which was not shorn of the final three bars of the central Adagio or the opening phrase of the finale).

As an appendix we include some off-air recordings, in this instance taken from the Ford Sunday Evening Hour (1937) which was regularly broadcast coast to coast in the USA during the 1930s and early 1940s via the Columbia Broadcasting System - the Grieg (with the Detroit Symphony Orchestra under Victor Kolar), Chopin Etudes and Bach Gigue.

Significantly, almost all the works included in this programme are further additions to the Myra Hess discography.

This has been an outstandingly successful series of discs – the quality of the transfers, given some intractable problems, has been generously, often triumphantly high…the series has both expanded Hess’s discography and our appreciation and understanding of her as a recreative artist. One can ask for little more.