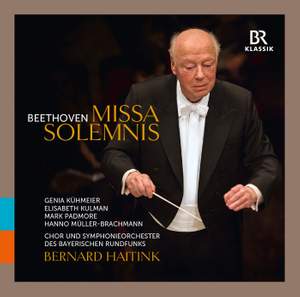 Haitink at 85 makes his first recording of one of music’s choral masterpieces – and what a wonderful performance his wisdom and experience offers. — Gramophone Magazine, August 2015 More…

The BR-KLASSIK label has already released several recordings with Bernard Haitink, who has now been connected with the Symphonieorchester des Bayerischen Rundfunks for over 55 years. Following Bruckner's Fifth Symphony, Mahler's Ninth and Haydn's "Creation," BR-KLASSIK now presents a live recording of Ludwig van Beethoven's "Missa solemnis" – a work performed for the recording market for the first time under the baton of Bernard Haitink. The musical partners of this grand seigneur among world-class conductors are the Choir and Symphonieorchester des Bayerischen Rundfunks as well as a finely coordinated ensemble of soloists, consisting of Genia Kühmeier, Elisabeth Kulman, Mark Padmore and Hanno Müller-Brachmann.

Haitink at 85 makes his first recording of one of music’s choral masterpieces – and what a wonderful performance his wisdom and experience offers.

it is deeply felt, has a superbly disciplined and committed chorus, and grows powerfully towards an Agnus Dei whose darkness and terror are beautifully realised.