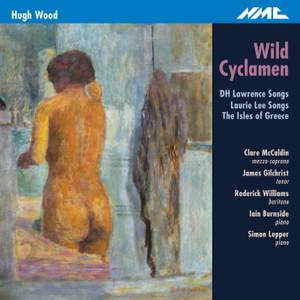 Wood is nothing if not a craftsman, and his vocal lines are always skilful amplifications of the text while his idiomatically written piano parts set the voice off to its best advantage — BBC Music Magazine, July 2015, More…

No. 3. Roses on the breakfast table

Wood, Hugh: The Isles of Greece

No. 1. A Dream of Frances Speedwell

No. 3. Beatrice and Dante

No. 12. Hedges Freaked with Snow

Composer Hugh Wood is known for his powerfully communicative and lyrical music and this latest release presents a selection of songs spanning his career. They are set to poems by DH Lawrence, Robert Graves, Laurie Lee and Lawrence Durrell, exploring themes of youth, love, lust and longing.

Wild Cyclamen (2006) – a song-cycle from twelve individual, unrelated poems by Robert Graves – depicts the rise and fall of a love affair. Hugh Wood explains: “Graves wrote no such cycle but I’ve dared to construct one. It doesn’t achieve too strong a story-line, but the songs are meant to be sung in a fixed order”.

The DH Lawrence settings (1998) include three poems Lawrence wrote about his days with Frieda in Bavaria and the Isles of Greece (2007) is a compilation of poems celebrating various aspects of Greek life and its people.

The earliest works on this recording are the Laurie Lee Songs (1956-58) written when Hugh was in his mid-twenties.

Wood is nothing if not a craftsman, and his vocal lines are always skilful amplifications of the text while his idiomatically written piano parts set the voice off to its best advantage

Wood has produced more than a dozen voice-and-piano works, and here are four: three collections and a song cycle proper. The five Laurie Lee Songs, dating back to 1958, come over with a post-Brittenish freshness.