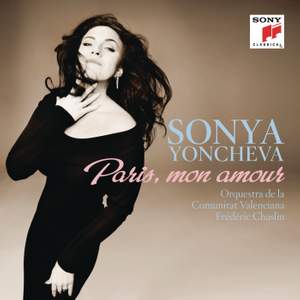 Recording of the Week,  An Operatic Trip to Paris with Sonya Yoncheva

Sonya Yoncheva is one of today’s fastest rising young opera stars. The young Bulgarian soprano first gained international prominence when she took first prize in the 2010 edition of Plácido Domingo’s prestigious Operalia competition at the Teatro alla Scala in Milan. She has collaborated with many artists from the world of opera, and also cross genres: with names from the rock and pop world such as Sting and Elvis Costello, as well as with outstanding classical musicians like Plácido Domingo and Jonas Kaufmann. ‘Paris, mon amour’ was recorded in one of Europe's most prestigious concert halls - the Palau de la Música in Valencia, under the baton of renowned conductor Frédéric Chaslin. This debut album concentrates on a particularly appealing period, the ‘Belle Époque’ 1871 to 1914. of cultural life. The ‘Belle Époque’ eminently suits Sonya, who communicates both elegance and panache onstage, both in her distinctive, multicolored voice and her irresistible personality. Forthcoming residency at the Royal Opera House London in "Verdi 'La Traviata' - Violetta". 'OPERA' magazines "Record Of The Month" for May. The Guardian quotes "Sonya Yoncheva is surely a star in the making".

one of the most effortlessly and gorgeously sung accounts of [Sempre libera] I know...her sensual singing of unhackneyed arias by Massenet, Gounod, Messager and Lecocq announces one of the loveliest lyric sopranos before the public today.