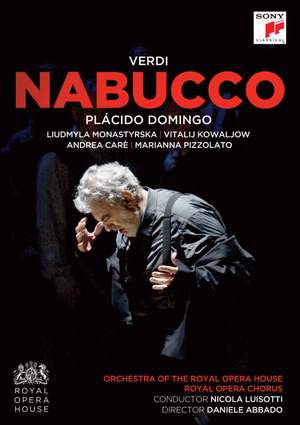 On 16 March Sony Classical presents a highlight among its releases of major opera works: a memorable performance of Verdi’s Nabucco from the Royal Opera House in London, recorded live in April 2013. In this production Plácido Domingo made his debut in the role of Nabucco – in the bicentenary year of Verdi’s birth.

With 50 years of stage experience, flourishing in a second career as a baritone, Domingo takes the role of the Babylonian king with undiminished energy and charisma. “From the moment Domingo appears this production ... feels pulsatingly alive,” wrote The Independent, praising the expressive beauty of his singing: “as the majestic Nebuchadnezzar ... Domingo fills the space with ease, and his baritone timbre has much of the old tenor burnish.”

The production was directed by Daniele Abbado, who took the opera’s theme of the enslavement of the Jewish people as his cue to give the opera a 20th-century setting. The chorus and orchestra, expertly led by Nicola Luisotti, an experienced master of Verdi’s music, have also won high praise from the critics.

It is the towering figure of Plácido Domingo whose arrival, in the words of the Financial Times, “has crowned the Royal Opera's new Nabucco with a welcome aura of celebrity. ... Domingo exudes grandeur and authority, taking command of the role..." Thus Nabucco from the Royal Opera House in London takes its place alongside other recordings on Sony Classical from the opera repertoire that have earned acclaim in the specialist music press and among the public.

Luisotti is able to shape the fluency that Antonio Pappano's orchestra and Renato Balsadonna's chorus have acquired in Verdi into a notably well-paced reading...This Sony Classical release offers a fine overall musical achievement, an outstanding leading lady and (perhaps) the collector's interest of a leading tenor working outside his comfort zone.