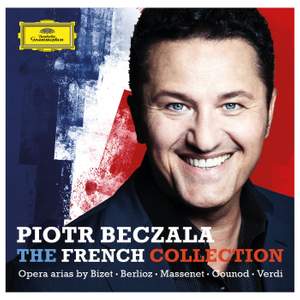 Crucially, his linguistic abilities are up to the challenge, and throughout the recital his French proves genuinely idiomatic. So does his appreciation of French style, with its important focus... — BBC Music Magazine, June 2015, 5 out of 5 stars More…

The remarkable Piotr Beczala has just won a prestigious ECHO Klassik award for “Singer of the Year” 2014 – and at the incredible gala event, he performed Massenet’s “Pourquoi me réveiller”, which will be on his brand new album. Now, this world-leading tenor makes an awaited return to the studio and records a collection of best-loved operatic arias that lie at the core of his repertoire, all connected to France or Paris (either by French composers, or composed for the city of love, Paris). He is joined on this occasion by the German star soprano Diana Damrau.

Piotr Beczala is praised worldwide for his flawless, elegant delivery, immaculate musicianship and keen interpretive intelligence. His previous (and debut) album on DG was extremely well received by audience and press worldwide. Diapason d'Or in France, 10 in the Dutch magazine Luister, a glowing review in the Australian limelight: "if, like me, you are a fan of Richard Tauber, or if you just want to hear the best tenor since Nicola Geddai in this repertoire, you really must buy the album."

Now, Piotr Beczala records his first solo operatic album with Deutsche Grammophon. It will contain famous arias from Berlioz, Gounod, Massenet, Verdi and others. A perfectly cultivated and stylish singer, he is currently at the absolute peak of his career and shows deep affinity with the repertoire.

Crucially, his linguistic abilities are up to the challenge, and throughout the recital his French proves genuinely idiomatic. So does his appreciation of French style, with its important focus on declamation of the text as a fundamental...This pays huge dividends. A wide variety of dynamics and some thrilling top notes bring him success as Massenet's doomed Romantic poet

Beczala brings white-hot intensity to conflicted characters like des Grieux (Manon), Werther, and in particular Don José (try the beautifully judged diminuendo at the end of the famous ‘Flower song’, where many tenors simply power on through, and see if the hairs on your neck don’t prickle!)...a delightful aria from Boieldieu’s La dame blanche shows him to be no slouch in florid high-wire territory.

After Roberto Alagna, and possibly Jonas Kaufmann, there is no more charismatic French operatic hero today than the Polish tenor...He impresses in his core roles from Faust, Werther and Manon.

he is a meticulous singer, who eschews vulgarity or grandstanding: the score is always honoured, sometimes at the expense of spontaneous passion...but you don’t often hear the “Flower Song” from Bizet’s Carmen sung so impeccably.