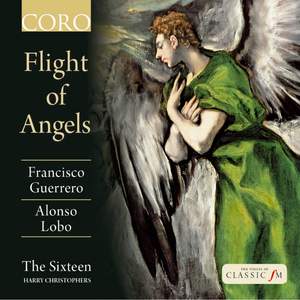 this programme…offers much warmth and richness of recorded sound — Choir & Organ, May 2015 More…

Lobo, A: Libera me

David talks to Harry Christophers about his new disc of polyphonic gems from the Spanish Renaissance with The Sixteen.

The Sixteen takes a trip back to 16th-century Spain and more specifically to one of the biggest, richest and most cosmopolitan cities on earth - Seville. It was during this 'golden age', when arts and culture flourished, that Francisco Guerrero and Alonso Lobo made their mark. Between them these two composers captured an astonishing variety of moods within their music, from ecstasy and joy to despair, longing and devotional stillness.

this programme…offers much warmth and richness of recorded sound

Most of the music is written for at least six voices (usually more), a richness of texture to which The Sixteen respond admirably: the textures remain lucid and legible throughout.

Christophers has devised a sequence that weaves together strikingly beautiful liturgical settings by both composers...The Sixteen performances may be a little detached and disembodied at times, but the poised beauty of their singing never fails.

As so often Christophers and the Sixteen prove to be the most persuasive advocates imaginable…[and]a commendably helpful essay by Martyn Imrie sets the seal on an outstanding release, beautifully recorded and scintillatingly sung. Vivant Sedecim!