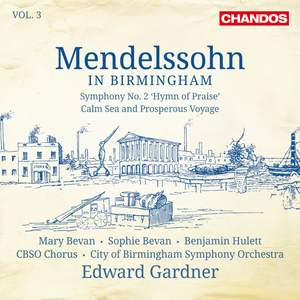 Calm Sea is one of Mendelssohn's most evocative pieces...and Edward Gardner conducts a most sensitive performance...[in the Symphony] Gardner stresses what over the years we have come to consider... — Gramophone Magazine, April 2015 More…

II. All men, all things, all that has life and breath (Chorus)

II. Praise thou the Lord, O my spirit (Soprano, Chorus)

III. He counteth all your sorrows in the time of need (Tenor)

IV. All ye that cried unto the Lord in distress and deep affliction (Chorus)

V. I waited for the Lord, He inclined unto me (2 Sopranos, Chorus)

VI. The sorrows of death had closed all around me (Tenor)

VI. We called thro' the dardness (Tenor) - The night is departing! (Soprano)

VII. The night is departing (Chorus)

IX. My song shall be alway Thy mercy (Soprano, Tenor)

X. Ye nations, offer to the Lord glory and might! (Chorus)

X. O give thanks to the Lord (Chorus)

This is the third recording in our Mendelssohn in Birmingham series, with the City of Birmingham Symphony Orchestra and its Principal Guest Conductor, Edward Gardner. The album features Calm Sea and Prosperous Voyage (Meeresstille und glückliche Fahrt) and Symphony No. 2, completing our survey of Mendelssohn’s mature symphonies.

Calm Sea and Prosperous Voyage is the second in a trilogy of concert overtures by Mendelssohn, the two others being A Midsummer Night’s Dream and The Hebrides, the latter recorded on Vol. 1 in this Chandos series. Based on two poems by Goethe these sonorous images describe a ship helplessly becalmed in the open sea, then carried by rising winds towards land. The densely textured, immensely slow opening evocation of oceanic calm and the following quickening full orchestral crescendo strikingly depict Goethe’s verses. Symphony No. 2 was valued as one of Mendelssohn’s greatest and most influential achievement for much of the nineteenth century – not least in Britain – but it has since come to be viewed equivocally. A fusion of neo-baroque procedures with romantic sentiment provides the backdrop of this hybrid Symphony-Cantata, made up of three orchestral movements and a choral finale, in which smooth contrapuntal arias contrast with exuberant, dramatic choral sections. The soloists are all emerging young artists in Britain, the wonderfully talented soprano sisters Mary and Sophie Bevan and the tenor Benjamin Hulett.

Calm Sea is one of Mendelssohn's most evocative pieces...and Edward Gardner conducts a most sensitive performance...[in the Symphony] Gardner stresses what over the years we have come to consider the more purely Mendelssohnian attributes, Apollonian qualities such as lightness, line and overall beauty of form.

This is in every sense an absorbing account [of Calm Sea], exceptionally well played and directed with admirable facility and understanding by Gardner…[the reading of the Second Symphony] is a thoroughly committed and scholarly one, and Gardner manages to invest several of the big choruses with near theatrical conviction…this fine account should certainly impress.

The playing of the CBSO is of the highest quality, and the perfectly balanced and blended sound of the wind sections is something very special...Edward Gardner is an ideal interpreter of this music, and one can sense how much he and his musicians love it...the whole disc is a rare pleasure.

Gardner favours bright, transparent, woodwind-highlight textures in these amiable accounts, with exquisite solo singing from the sopranos Sophie and Mary Bevan and the tenor Benjamin Hulett in the finale to Mendelssohn’s homage to Beethoven’s Choral Symphony.