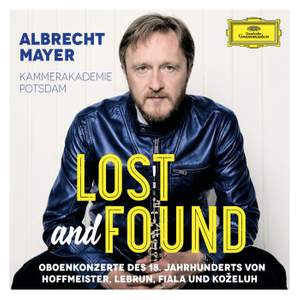 Mayer performs them with the suave elegance and sustained beauty of tone you would expect from the Berlin Philharmonic’s principal oboe — The Guardian, 26th February 2015, 3 out of 5 stars

Hoffmeister: Concerto For Oboe And Orchestra In C Major

Lebrun, L: Concerto for Oboe and Orchestra No. 2 in G Minor

Kozeluch: Concerto for Oboe and Orchestra in F Major

Deutsche Grammophon are very pleased to present Albrecht Mayer’s new album ‘Lost and Found’ in which he delivers a rare and sublime oboe concerti from the 18th century which he discovered in ancient music archives in Thuringia and Saxony.

The four, classically proportioned concerti are direct predecessors to Mozart – there is even evidence Mozart knew and studied these works, and may even have had a hand in the composition of the work of Kozeluch.

The music on this album is beautiful and very lyrical, and thus ideal for classical radio stations such as Klassik Radio, Classic FM etc and since his previous albums have consistently ranked in the German pop charts – the only oboist in history to have achieved such prominence and popularity- ‘Lost and Found’ will be the continuation of an incredible career of recorded success.