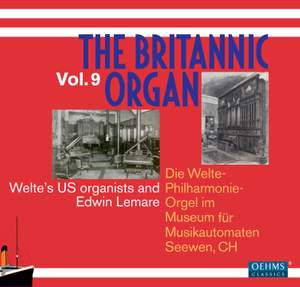 the organ’s roll player mechanism provides us with two CDs of quite incredible testimony by organists whose playing was never captured by microphones — Choir & Organ, May 2015, 5 out of 5 stars

Thiele, L: Theme and Variations in A flat major

Carnival of the Animals: XIII. Le Cygne (The Swan) (arr. A. Guilmant for organ)

The firm of M. Welte & Söhne maintained a branch in New York from 1865 until 1917 under the name of M. Welte & Sons. It had been established by Emil Welte (1841–1923, son of the company‘s founder); he lived in the USA permanently, only rarely visiting Freiburg. A recording studio with a grand piano for making piano recordings and a recording organ could be found at the best address on 5th Avenue. Piano recordings of the Welte firm were thus not only made in Freiburg im Breisgau from 1905 until 1932, but also in New York.