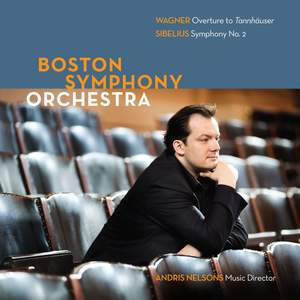 Recording of the Week,  Andris Nelsons conducts Sibelius and Wagner

The Boston Symphony Orchestra and Andris Nelsons are very pleased to announce their first compact disc recording, a BSO Classics release pairing the overture to Wagner's Tannhäuser and the Symphony No. 2 of Jean Sibelius. Both works are taken from concert performances earlier this season at Symphony Hall-the Wagner from Maestro Nelsons' inaugural concert as music director on September 27, 2014, the Sibelius from his BSO program of November 6-11. The selections are particularly meaningful. It was hearing Wagner's opera when he was just five years old that made Andris Nelsons want to be a conductor; the Sibelius reflects his strong interest in music of the Scandinavian and Slavic countries, and also builds upon the BSO's distinguished history of past Sibelius recordings.

Nelsons directs with his customary zest and watchful sensitivity, while securing uncommonly articulate results from his dedicated band…a memorably alive and intrepidly characterful conception of the entrancing sweep, elasticity and grip that hits indisputable heights in the bardic second movement and exultant finale, the latter sounding as refreshingly unhackneyed and confident in its stride as I can ever recall…it really does warm the cockles to hear this great orchestra firing on all cylinders in repertoire in which it enjoys such a doughty tradition

this is a performance of great energy, especially in the first movement, which has a huge amount of drive and motion. This is a symphony that has lots of tricky corners for a conductor to negotiate, and Nelsons manages them all with ease; everything seems to flow naturally without any awkward transitions.

The Boston Symphony Orchestra never sounds less than sumptuous. These live recordings...suggest that, in their new music director, Andris Nelsons, the Bostonians have found a kindred spirit. The danger is overkill...Balance that, however, against searing passion and unflagging energy.