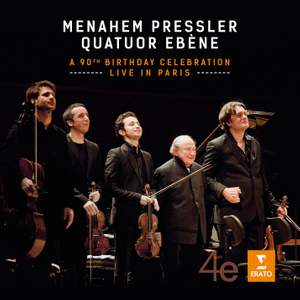 The Schubert Trout...radiates such communicative spirit and pure delight in making music together that one readily forgives the very occasional rough edge or slip of the finger. Above all, of... — Gramophone Magazine, November 2014 More…

The Quatuor Ebène was invited by legendary pianist Menahem Pressler to join him in celebrating his 90th birthday at a concert at the Salle Pleyel in Paris in November 2013. Their programme included two of the most life-affirming works in the chamber repertoire, Dvořák’s Piano Quintet in A major and Schubert’s ‘Trout’ Quintet, which form the CD version of this release. Additional items on the DVD version include the mesmerising encore – the Quatuor Ebène in the slow movement of Debussy’s quartet, with Pressler joining them on stage as a silent, but physically responsive partner. No wonder the 1800-strong audience burst into a rendition of ‘Happy Birthday’.

90 years old, and still performing superbly as a soloist and chamber musician, pianist Menahem Pressler is a phenomenon – as the members of the Quatuor Ebène delightedly acknowledged at a celebratory concert at Paris’s Salle Pleyel on November 7th 2013. Recordings made at the concert, which also brought contributions from the double-bassist Benjamin Berlioz and the tenor Christoph Prégardien, have now been released on both CD and DVD.

The Schubert Trout...radiates such communicative spirit and pure delight in making music together that one readily forgives the very occasional rough edge or slip of the finger. Above all, of course, this cherishable pairing is a celebration of how one remarkable survivor has immeasurably enriched the lives of so many.

Flexible fingers, bright eyes, a cherubic smile, a prodigious virtuosity: the American-Israeli pianist Menahem Pressler...is a model of old age at its most munificent...This is the present for any chamber music lover - if you can bear to give it away.

the world’s greatest chamber musician celebrates his 90th birthday...with the Quatuor Ébène as delightful companions. Elegant, affectionate music-making, with Pressler still showing the silky keyboard skills that made his 53 years with the Beaux Arts Trio such a glorious epoch.