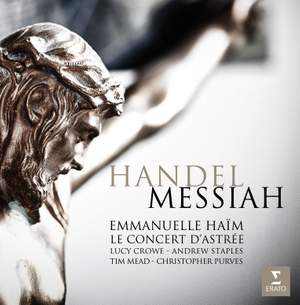 Haïm herself proves broadly sensitive to tempo...and balance has been excellently managed in what is a resonant acoustic. Le Concert d’Astrée's chorus numbers 20...they also keep light on their... — BBC Music Magazine, January 2015, 4 out of 5 stars More…

"Ev'ry valley shall be exalted" (Tenor)

"And the glory of the Lord shall be revealed" (Chorus)

"But who may abide the day of His coming?" (Alto)

"And he shall purify" (Chorus)

"Behold, a virgin shall conceive" (Alto)

"O thou that tellest good tidings to Zion" (Alto, Chorus)

"For behold, darkness shall cover the earth" (Bass)

"The people that walked in darkness" (Bass)

"For unto us a child is born" (Chorus)

"There were shepherds abiding in the field" (Soprano)

"And lo, the angel of the Lord came upon them" (Soprano)

"And the angel said unto them" (Soprano)

"And suddenly there was with the angel" (Soprano)

"Glory to God in the highest" (Chorus)

"Then shall the eyes of the blind be open'd" (Alto)

"He shall feed His flock like a shepherd" (Alto, Soprano)

"His yoke is easy, His burthen is light" (Chorus)

"Behold the Lamb of God" (Chorus)

"He was despised" (Alto)

"And with His stripes we are healed" (Chorus)

"All they that see Him laugh Him to scorn" (Tenor)

"He trusted in God" (Chorus)

"Behold, and see, if there be any sorrow" (Tenor)

"But Thou didst not leave His soul in hell" (Tenor)

"Unto which of the angels said He at any time" (Tenor)

"Let all the angels of God worship Him" (Chorus)

"The Lord gave the word" (Chorus)

"How beautiful are the feet" (Soprano)

"Their sound is gone out into all lands" (Chorus)

"Why do the nations so furiously rage together" (Bass)

"He that dwelleth in heaven" (Tenor)

"Thou shalt break them with a rod of iron" (Tenor)

"I know that my Redeemer liveth" (Soprano)

"Since by man came death" (Chorus)

"Behold, I tell you a mystery" (Bass)

"The trumpet shall sound" (Bass)

"Then shall be brought to pass the saying" (Alto)

"But thanks be to God" (Chorus)

"Worthy is the Lamb that was slain" - Amen (Chorus)

David listens to a new recording of Handel's Messiah, with Emmanuelle Haïm and the Concert d’Astrée orchestra and choir.

Emmanuelle Haïm has established herself as one of the world’s leading performers, conductors and interpreters of Baroque repertoire, not only with Le Concert d’Astrée, the ensemble she founded in 2000, but with several of the world’s greatest orchestras. Known for her fresh and expressive approach to Baroque music, she has appeared as a guest conductor with the City of Birmingham Symphony Orchestra, Scottish Chamber Orchestra, Deutsches Symphonie-Orchester Berlin, Frankfurt Radio Symphony Orchestra, and the Berliner Philharmoniker. With her own ensemble she has garnered critical acclaim and several international awards, including Victoires de la Musique Classique, ECHOs, Gramophone Awards, and Grammy nominations.

For this English-language recording of Handel’s masterwork Messiah, Haïm is joined by the orchestra and chorus of Le Concert d’Astrée, as well as four outstanding English singers – Lucy Crowe, Tim Mead, Andrew Staples and Christopher Purves.

Haïm herself proves broadly sensitive to tempo...and balance has been excellently managed in what is a resonant acoustic. Le Concert d’Astrée's chorus numbers 20...they also keep light on their collective feet. The 26-strong orchestra, too, supplies vitality as well as solemnity and flexibility.

Haïm directs the music with the same sort of Gallic lightness and grace that she absorbed during her early years with the French group Les Arts Florissants...The result is not as exhilarating as some, and sometimes a touch fussy, but Haïm finds expression wherever she looks and Le Concert d’Astrée respond keenly.

The delivery of the choruses is crisply focused and shaped impressively, Haïm sensibly opts to hire top-notch English freelancers...There are a small number of occasions when Haïm could have let the music speak more naturally for itself...Nevertheless, the fusion of dramatic mood, orchestral texture and an inspired soloist often pays off handsomely.

The soloists rise to Haïm’s challenge in fine style; all show great flexibility in adapting their voices to expressing a far wider range of emotions than Messiah is normally thought to involve...This is definitely a Messiah worth listening to; lively and varied, it really is a new injection of life into an old favourite work and a recording that can stand shoulder-to-shoulder with any of the existing benchmarks.

the vocal ornamentation, as sung by the outstanding solo quartet...sounds entirely stylish and idiomatic...Haïm’s choir for this work, too, comprises mainly native English-speakers, and it shows in their trenchant diction. Their Hallelujah is magnificent...One of the most dramatic and exciting Messiahs in recent memory.

The choir and orchestra of Le Concert d’Astrée trot along with the trim rhythms now customary in “authentic” performances of Handel. Occasionally they slice their notes too abruptly for comfort...Among the soloists, Lucy Crowe and Christopher Purves are the most consistently pleasurable.