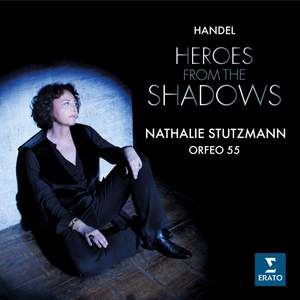 Heroes from the Shadows - Handel Arias

Stutzmann has a real feeling for pulse and text and still boasts formidable fioritura. — BBC Music Magazine, January 2015, 3 out of 5 stars More…

Contralto & conductor Nathalie Stutzmann is an exciting new signing, having left Deutsche Grammophon/Universal to join the Erato roster. Considered to be one of the most outstanding musical personalities of our time, she has parallel careers as both a contralto and an orchestra conductor. She sings regularly with the world’s greatest conductors and orchestras, including the Berliner Philharmoniker under Sir Simon Rattle, Vienna Philharmonic, Orchestre de Paris, the LSO and Rotterdam Philharmonic under Yannick Nézet-Séguin. She currently is in residence with the São Paulo Symphony Orchestra (OSESP).

In 2009, Nathalie Stutzmann founded her own chamber orchestra, Orfeo 55, playing on both baroque and modern instruments, with which she tours extensively and partners her on this new release. The orchestras’ repertoire reflects the breadth of Nathalie’s own, performing not only music from the Baroque period, but also works by composers in the 20th century such as Richard Strauss and Arnold Schoenberg. This album focuses on Handel’s contralto arias, wonderful music from some of his best-loved operas, but rarely heard independently of full performances. With this release Nathalie Stutzmann gives light to these heroes usually in the shadows, giving these characters and this wonderful music a new perspective – making them the stars of this album.

Stutzmann has a real feeling for pulse and text and still boasts formidable fioritura.

Stutzmann's dark, smooth contralto is always a pleasure to hear but her expressive intensity, athletic virtuosity and emotional intelligence make it a valuable instrument indeed...it is hard to imagine anyone bringing more depth and nobility to Handel's heart-rending slow arias of hopeless love.

Alceste’s Son qual stanco Pellegrino, and Irene’s Par che mi nasca from Tamerlano in its rare version with clarinets are highlights, but the entire disc is collectible.

Not everyone, I suspect, shares my enthusiasm for Stutzmann’s dark, androgynous voice. But there’s no mistaking either her musicianship or her commitment here, while Orfeo 55, clearly a force to be reckoned with, play superbly for her.

Some will find her too fruity; these ears however find a stylish, responsive delivery and a refreshing directness. The playing of Orfeo 55 is beyond reproach.

Interview in French with English subtitles