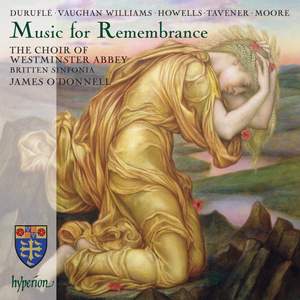 This is an exquisite performance of the Durufle Requiem...The playing of the Britten Sinfonia is superb, Robert Quinney's fluid, immensely colourful organ-playing a joy to behold and Roderick... — Gramophone Magazine, November 2014 More…

II. Prayers in the time of distress

Tavener: The peace that surpasseth understanding

This latest album from Westminster Abbey is a programme of memorial music composed in England and France in the shadow of two World Wars.

The main feature is Duruflé’s Requiem, one of the best-loved of all works of the twentieth century, and given an astoundingly beautiful performance here, enhanced by distinguished soloists Christine Rice and Roderick Williams.

The Requiem is many ways a paradoxical work, based on plainsong but with Durufle’s sensuous harmonies suffusing every note with feeling: ‘This Requiem is not an ethereal work which sings of detachment from human concerns’, he said. ‘It reflects, in the unchanging form of Christian prayer, the anguish of man faced with the mystery of his final end.’ It is a work of unimpeachable integrity, a miraculous synthesis of the old and the new.

Throughout the past century the Abbey has been a focus of national remembrance on Armistice Day, and ‘O God, our help in ages past’—the ‘great ceremonial hymn of the English nation’, quoted in Vaughan Williams’ Lord, thou has been our refuge—has been a constant and reassuring presence, from the Burial Service of the Unknown Warrior on 11 November 1920 to the Service commemorating the Passing of the World War One Generation on 11 November 2009. The anthem by John Tavener recorded here was composed for that service, and all the other English music has some special significance in this place: a statue of Dietrich Bonhoeffer stands above the west door of Westminster Abbey (one of the ten twentieth-century Christian martyrs installed in the niches there in 1998), while the ashes of Herbert Howells and Ralph Vaughan Williams are buried in the church where their music has contributed so much to daily services and great state occasions.

This is an exquisite performance of the Durufle Requiem...The playing of the Britten Sinfonia is superb, Robert Quinney's fluid, immensely colourful organ-playing a joy to behold and Roderick Williams a supremely compelling baritone soloist...O'Donnell moulds and shapes every moment with infinite care...as a beautiful listening experience it is in a class of its own.

The two soloists are excellent. Roderick Williams shows his usual sensitivity not just to the music but also to the text...The Westminster choir gives a fine account of the wonderful, eloquent Howells anthem...
James O’Donnell’s excellent choir is on top form throughout this recital.

Roderick Williams features widely in remembrance recordings this year...and here in Duruflé’s transcendent Requiem, his beautiful unforced baritone perfect for the mysterious Domine Jesu Christe, with the strings of the Britten Sinfonia adding an elegant sheen in the expansive acoustic of the abbey.