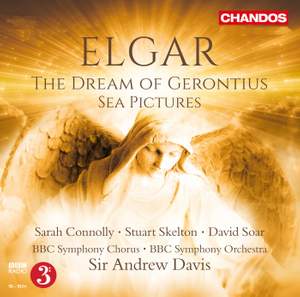 among the best Gerontius performances on record. Davis resists the temptation to make the work sound like a flabby, imitation Parsifal and the results are outstandingly convincing...[Skelton]... — BBC Music Magazine, Christmas 2014, 5 out of 5 stars More…

No. 3. Sabbath Morning at Sea

Part I: Jesu, Maria - I am near to death (Gerontius)

Part I: Be merciful, be gracious (Chorus)

Part I: I can no more; for now it comes again (Gerontius)

Part I: Go, in the name of Angels (Chorus)

Part II: I went to sleep (The Soul of Gerontius)

Part II: My work is done (The Angel, The Soul of Gerontius)

Part II: It is a member of that family (Soul of Gerontius)

Part II: I ever had believed (The Soul of Gerontius)

Part II: But hark, upon my sense comes a fierce hubbub (Soul of Gerontius)

Part II: I see not those false spirits (The Soul of Gerontius, The Angel)

Part II: Glory to Him, who evermore by truth and justice reigns (Chorus)

Part II: But hark! A grand mysterious harmony (The Soul of Gerontius)

Part II: Praise to the Holiest in the height (Chorus)

Part II: The judgment now is near (The Angel, The Soul of Gerontius)

Part II: Jesu! By that shuddering dread (The Angel of the Agony)

Part II: I go before my Judge (The Soul of Gerontius, Chorus)

Part II: Praise to His Name! (The Angel)

Part II: Take me away, and in the lowest deep there let me be (The Soul of Gerontius)

Part II: Lord, Thou hast been our refuge (Chorus)

Chandos Records is delighted to present this new recording of Elgar’s choral masterpiece The Dream of Gerontius and the enduringly popular song cycle Sea Pictures. The BBC Symphony Orchestra and Chorus are conducted by Sir Andrew Davis, a peerless Elgarian who this year was awarded the prestigious Elgar Society Medal in recognition of his outstanding contribution to the composer’s music. In Gerontius the soloists are Stuart Skelton, David Soar and Sarah Connolly, who also sings in Sea Pictures. This recording was made in the days leading up to their triumphant live performance of Gerontius in April of this year in which Skelton was praised as ‘the ideal tenor for the role of Gerontius’, Soar described as ‘an implacable, dark sounding Priest’ and Connolly, ‘a consummately polished Angel’ (The Guardian).

Elgar’s Dream of Gerontius was commissioned in 1900 for that year’s Birmingham Festival.

The score was produced in a hurry but Elgar had long before known the text which the work sets, Cardinal Newman’s religious poem that powerfully recounts the final dream of a dying believer and the journey of his soul through death. The performers struggled with Elgar’s score at the disastrous premier but this did nothing to stop the immediate popularity of The Dream of Gerontius. It is recognised today by many as the greatest choral work by any English composer.

Written not long before Gerontius, Sea Pictures sets a collection of poetry by different authors all on a single theme. Inspired by his love of nature, Elgar’s songs explore the emotional resonances of the sea, from serene still waters to a mighty ocean storm.

among the best Gerontius performances on record. Davis resists the temptation to make the work sound like a flabby, imitation Parsifal and the results are outstandingly convincing...[Skelton] has the heft and stamina for Gerontius's most dramatic moments. He's too intelligent a singer, however, to belt them out operatically...This Gerontius is a wonderful achievement.

Sarah Connolly’s understanding and delivery of the text is exemplary, her voice firm, consoling and assured – she is quite the equal of Janet Baker...Stuart Skelton is an exceptional Gerontius, vocally and dramatically: no phrase is ever sung without meaning and one senses a hinterland to his performance.

[Davis's] patient and scrupulously observant conception of the whole work evinces a selfless authority, wisdom and instinctive ebb and flow...Skelton's stamina, dramatic range and ringing, Vickers-like tone are a tremendous asset...Soar, too, sings with lofty projection and unstinting eloquence...Arguably best of all, though, is Sarah Connolly, who brings a deeply affecting radiance, sense of wonder and intelligence to everything

Connolly’s Sea Pictures is very good...the Andrew Davis Gerontius is a reading to cherish. He shapes Elgar’s masterwork with wonderful sensitivity, revelling in the work’s ethereal nods to the hereafter, but grounding the first part in the pain and uncertainty of the death-bed...Skelton is a fantastic Gerontius. He tones down the Heldentenor elements of the voice to stress role's vulnerability.

Skelton’s bronzed Heldentenor suggests a mature Parsifal, one of Elgar’s inspirations. He is more visceral than the more cerebral British Gerontii, but his thrilling Take Me Away is surely just the Wagnerian sound Elgar wanted. Connolly’s Softly and Gently — and Sea Pictures — rivals Baker’s in beauty of tone.

Perfect Gerontius tenors are rare. Philip Langridge, who recorded it with Andrew Davis in 1997, was the last. Stuart Skelton, so different in voice colour, fuller and more heroic but similarly human, modest and touching, is every bit as brilliant... A disc of the year.